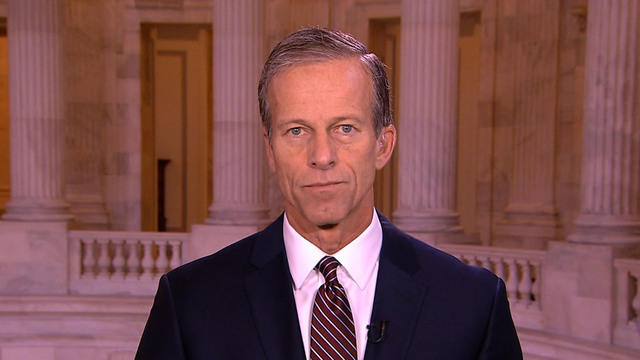 As the Senate prepares to unveil their version of the House Republican tax plan, South Dakota Republican Sen. John Thune told "CBS This Morning" on Thursday that portions of their bill will "largely follow the House's action."

He added of the differences, "We're all on the same team, we want to get to the same end zone and sometimes we call slightly different plays in the House and the Senate but that's the way the process works."

While Thune says further details will be rolled out sometime Thursday, The New York Times reports that the Senate plan will likely create more than four tax brackets, and eliminate (rather than limit) deductions for state and local income taxes, sales tax and property taxes. The Senate bill reportedly would also put new limits on the number of people affected by estate taxes.

Thune would not confirm the exact number of tax brackets in the Senate's version, but said Senators are looking to "do away with a lot of itemized deductions in the code" in order to bring "simplification to the code."

He defended the idea of eliminating deductions for state and local taxes, which would disproportionately impact residents of high-tax states like New York, New Jersey and California.

"In terms of that deduction, it's been around for a while but it also is one that we think subsidizes states that have higher taxes, and by eliminating that deduction it will force states to look at their budgets," said Thune, adding that it's a part of the code that "needs to go away."

Thune told CBS News that the bill will be "consistent with the instruction given by the budget committee," which included an additional $1.5 trillion deficit "to be dealt with in the form of hopefully higher economic growth."

While the senator wouldn't guarantee that no middle class family would see their taxes increase, he said lawmakers are trying to "maintain the tax burden similar to what its today."

Thune was hopeful that Americans would see the plan passed sometime before January 1st and that it had "enough features that will be attractive" to his Democratic colleagues to secure enough votes of support.