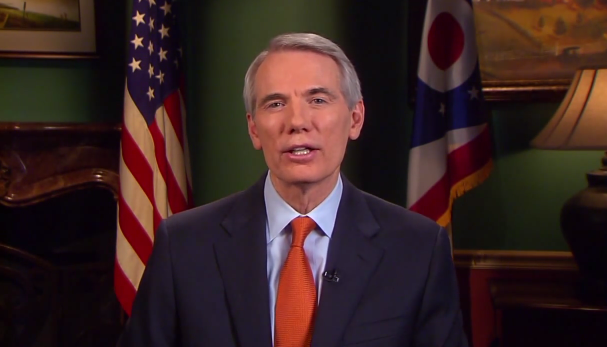 Sen. Rob Portman, R-Ohio, condemned President Obama's new budget Saturday as the latest in a series of fiscally irresponsible proposals from the White House, promising a "very different" fiscal roadmap from the Republican Congress in the coming weeks.

The president "could have laid out policies that would put us back on track to balanced budgets and more economic growth," Portman, a member of the Senate Finance Committee, said in the weekly GOP address. "He could have cut waste, made our government more efficient and effective, and done all in his power to ensure that every single dollar of the taxes we pay is spent wisely. But he didn't, and that's why this new budget is so disappointing."

He said the plan "includes $1 trillion in new government spending," and it never balances itself -- "not in five years, not in 10 years. Not ever."

The president has argued America can afford to pull back somewhat from the austerity economics that held sway after the recession, given the accelerating job growth and economic growth in recent months. His budget includes new investments in higher education, infrastructure, and job training, and he argued Friday during a speech at a community college in Indianapolis that America "can actually afford to pay for all of this" now that deficits are falling and the recovery is gaining steam.

In his own address on Saturday, the president said his budget is based on the principle of "middle-class economics" he laid out in his State of the Union address last month. He suggested his new proposals would be financed "with smart spending cuts and by fixing a tax code that's riddled with special-interest loopholes for folks who don't need them."

Portman, though, promised a "very different" budget from Republicans in Congress.

"Our budget will cut waste. It will spend smarter, putting efficiency and effectiveness of government at the top of the agenda," Portman said. "It'll recognize that you already pay enough in taxes, and instead propose pro-growth policies that create an environment where good paying jobs can thrive. It'll put us back on the path towards the kind of balanced budgets you have the right to expect."