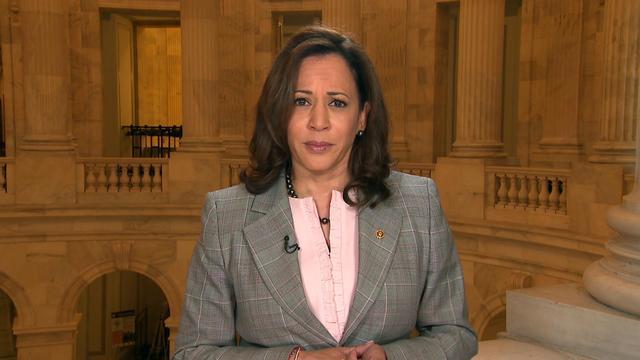 Sen. Kamala Harris, a top Democrat on the Senate Judiciary Committee currently in the throes of the Brett Kavanaugh confirmation process, says she believes the woman accusing Kavanaugh of sexual misconduct when the two were high school students in the 1980's. Harris told "CBS This Morning" on Tuesday that Christine Blasey Ford, the woman behind the allegations, has "nothing to gain" by stepping forward.

"I think it's going to be about, it comes down to credibility...and it's going to about listening to what each party has to say, but I believe her," said Harris.

Both Kavanaugh and Ford have since agreed to testify before Harris' committee on Monday in a public hearing, delaying this week's scheduled vote on Kavanugh's confirmation originally set for Thursday. Republicans on the committee agreed to hold the high-stakes hearing after some of its own members, mostly Democrats, decried the process moving forward without first giving Ford a public forum to share her story.

The senator added, "My concern is, and she knows this, she is putting herself out there, knowing they're going to try to excoriate her and she's doing it because she knows this is an important matter, it's a serious matter who serves on that court and she has the courage to come forward, she has nothing to gain."

Meanwhile, Harris urged the FBI to pursue a thorough and comprehensive background investigation into Kavanaugh's record in light of the allegations against him. She said that despite six previous FBI background checks into Kavanaugh's record, the American public "deserves to know the character" of someone who could potentially serve his entire life on the highest court in the country.

"I want to know about this guy's background and the American public wants to know, are we about to put someone on the United States Supreme Court who committed a sexual assault?" Harris inquired.

She added, "I believe that the FBI should be compelled to do its job in terms of completing their background investigation and that's not being done." Harris said she's concerned the men and women of the FBI are not being given the "authority" to conduct such an investigation.

Despite Harris and other Democrats' urging, the FBI maintains that there is no potential federal crime taking place with regards to the Kavanaugh allegations.