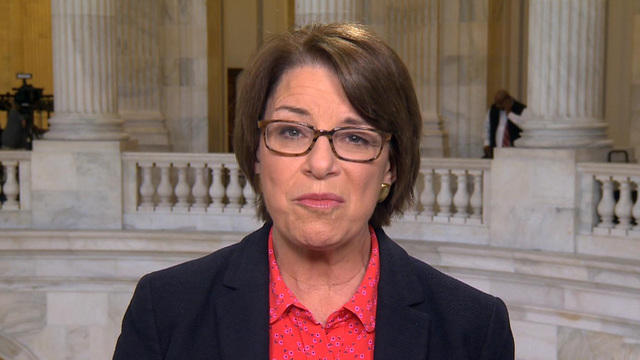 Senator Amy Klobuchar, D-Minnesota, says after Facebook CEO Mark Zuckerberg's four hour-long grilling by Senate lawmakers on Tuesday, "this is really not an end but a beginning" for the social media site's work on ensuring data privacy for its millions of users.

"What are they really going to do to on their site, is it going to be easy for you as a user to just go in there and click that you want to keep your data private? Or are you going to have to go to 30 spots on the site?" questioned Klobuchar on "CBS This Morning" on Wednesday.

Klobuchar said after Tuesday's hearing, Facebook appears willing to begin making real changes with regard to privacy in the wake of political consulting firm Cambridge Analytica obtaining data on as many as 87 million users. The senator said she suggested the site needs to also make users aware of such data breaches within 72 hours of activity.

She said that Zuckerberg also agreed to comply with the Honest Ads Act, a bipartisan bill that would make online advertisers disclose who paid for ads, just as TV and radio advertisers do.

"They're going to start putting out all their ads they get, political ads, post them with disclaimers -- that's a major change. But all of this we have to see what happens and if they actually do all this," said Klobuchar.

As for Zuckerberg's claim that his site is not a media company, Klobuchar said she doesn't "buy that at all."

Klobuchar said she expects additional bipartisan bills to be put forward in the comings days to make sites put "rules of the road in place."

"You just can't have Facebook doing one thing, you want to have all of them having some privacy controls as well as breach notifications and other ways, a bill of rights for users of these social media company platforms," added Klobuchar.

Klobuchar calls off Minnesota rally as protesters take over stage