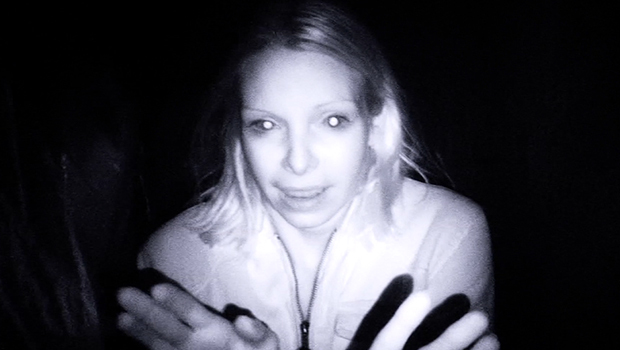 On a chilly Saturday night in October, Dr. Margee Kerr stood outside the exit of The Basement, the latest haunted attraction to enter the Pittsburgh fright scene. The Basement is part of ScareHouse, ranked among the country's top haunted houses by the Travel Channel.

If a normal haunted house is like a scary movie, The Basement is a psychological thriller. Inside, actors dressed as zombies do more than jump out of dark corners. They scream at you. Half naked, they press their bodies up against you and lick your neck. In one terrifying room, they pretend to slit your throat.

Whether guests exit laughing hysterically or looking terrified, Kerr is there to greet them. A sociologist and "scare expert" who helped design The Basement, she peppers them with questions, trying to determine if the experience hits its mark.

"A lot of the customers wanted something more intense and engaging, and there was this desire for a more extreme experience," she tells CBSNews.com.

That desire is apparent across the country. At The Basement, guests pay $35 each. To walk through Blackout, a haunted house that started in Los Angeles and now has locations New York City and Chicago, visitors shell out $65. Both The Basement and Blackout are sold out through the season.

"We wanted it to be a scary experience but one that was not going to trigger any trauma," says Kerr. "Uncertainty is so difficult to deal with. When we can't sense, we can't predict, that is terrifying... that uncertainty just triggers everything."

Given the complexity of our brains, triggering the sensation of fear -- without inflicting lasting trauma -- is more complicated than adding new zombies or heightening the sound effects.

There are two approaches to understanding how fear works in the brain. Dr. Joy Hirsch of Yale University investigates using an fMRI scanner. In the scanner, researchers provide study participants with a stimulus -- usually an image of a frightened person or a spider or snake -- that is known to trigger the response.

"No matter how well you know that there is nothing fearful going on at all, there is no real threat, that stimulus of the fearful face is sufficient to activate a whole cascade of circuitry," Hirsch explains. "It's a really important fact in studying fear that there are some stimuli that it's very difficult to override a physiological response."

The current understanding is that a region of the brain called the thalamus picks up on a threat, through visual or auditory clues. The sensory data then travels along two circuits, which Dr. Joseph LeDeux at New York University has named the "low road" and the "high road."

Along the low road, the sensory data travels to the hypothalamus, the region of the brain that sets off the "fight or flight" reaction.

Your heart starts racing, pumping extra blood to your muscles. You might feel a chill as less blood is pumped to your skin. Your pupils dilate to take in more light. This is all happening because the hypothalamus sets off the sympathetic nervous system and the adrenal-cortical system.

The adrenal glands pump out glucose, which provides an energy boost in case you need to run. The adrenal-cortical system also releases a burst of about 30 hormones, including endorphins and dopamine.

As all of this is happening, the original sensory data -- the sound of a door creaking, the sight of a zombie jumping out -- also travels along the second circuit, a longer path known as the high road.

That circuit ends in the hippocampus, the part of the brain where long-term memories are stored. The hippocampus pulls up those memories to put the threat into context. In something like a haunted house, the hippocampus will realize that the zombie is just an actor and that you are not in any true danger.

"The second signal lets us know that everything is okay," explains Kerr. "If the second signal is saying this is for real, this is legit, then it's not fun. A lot of scary material wants to trigger the first signal but also reinforce that no, this is actually not going to eat you."

The startle reaction is distinguished from more long-term fear, which Kerr says are more accurately called anxieties because, she says, "we are not going to know the answers to them for years, so we have no way of bringing about certainty. Whereas fear, that's immediate, there's a response and a resolution. Even if bad, it's over and you can move on." When anxiety is triggered, though, it has more lasting effects.

Individuals respond differently to her designs. Since The Basement opened last month, at least three dozen people have used the designated safe word -- "Bunny" -- which lets them out immediately.

"One of the really fascinating aspects of the brain and its reaction to fear is the aspect of individual differences," says Hirsch. "Some people panic, another may think its funny. Some are very frightened and want to run, others may seek the thrill of the chase and go chasing the frightening stimulus."

Scientists aren't sure why. "The same areas in the brain may be connected slightly differently or share information differently" in different people, Hirsch explains.

Kerr says the reason some people love The Basement and some hate it can partially be explained by looking at how our brains receive the flood of hormones during fight or flight. "Some people are going to have a lot of dopamine released," she says, which feels like a natural high.

"Once they get a taste of how much fun it can be to be terrified, they want to see how far can I push myself?" she adds. "They get a taste and they love it or hate it and if they love it they say okay, let's see what's next. It sounds like a drug addiction, but it's got some of those similar patterns."

As a sociologist, she believes there is another element at play: The modern world is significantly safer than what our prehistoric ancestors encountered in the wild, at the time when the human brain was developing, but we still want the chemical pay-off of experiencing fear.

Craving that fear response explains the sheer thrill written all over the faces of so many of The Basement's visitors. "My heart's racing," said one enthusiast. "Haunted houses don't do anything for me anymore, and that actually got my adrenaline pumping."

It's music to Kerr's ears, who can't help but note, "It's really crazy to think something terrifying and gory can bring people such joy."