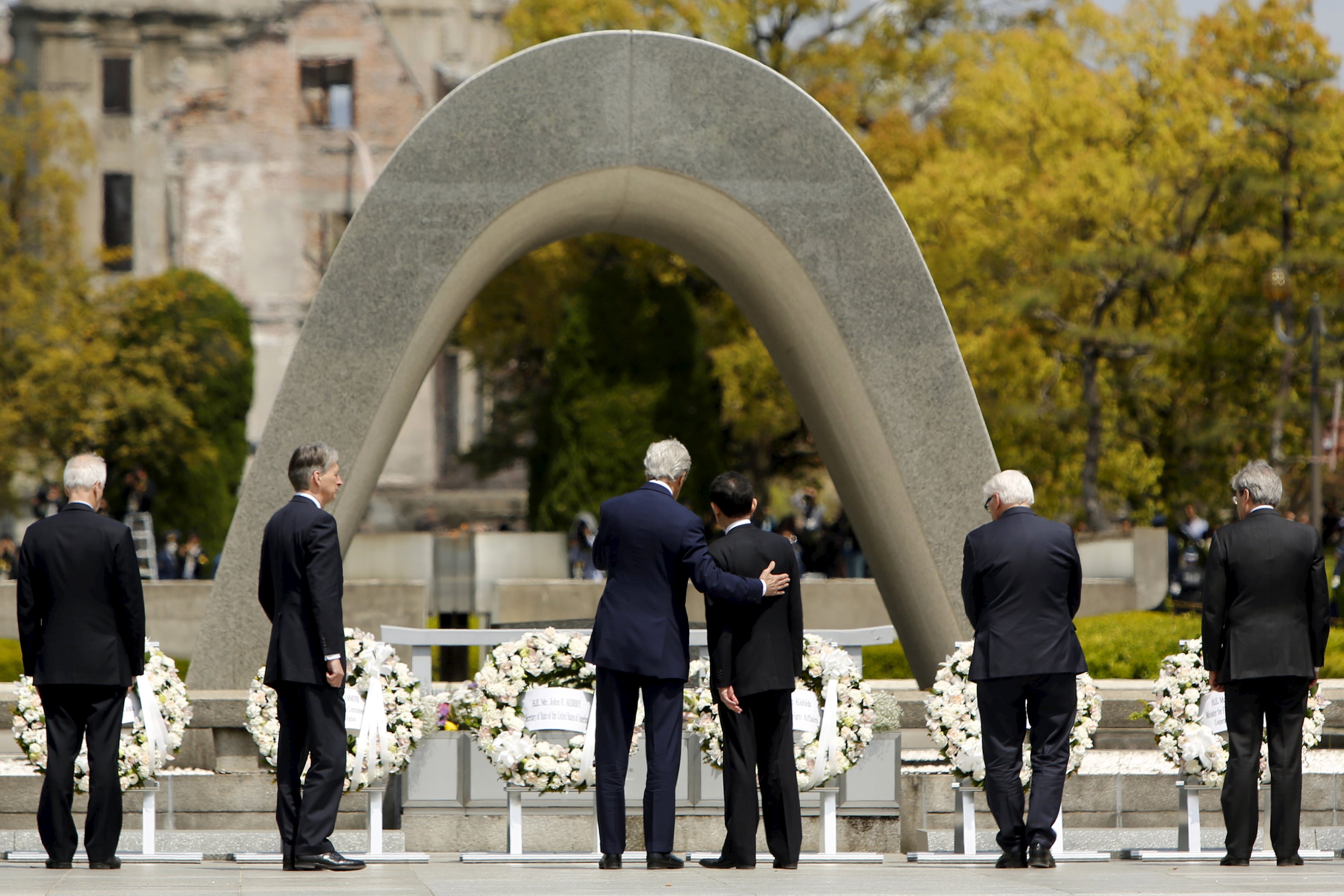 HIROSHIMA, Japan-- U.S. Secretary of State John Kerry visited the revered memorial to Hiroshima's atomic bombing on Monday, delivering a message of peace and hope for a nuclear-free worldseven decades after United States used the weapon for the first time in history and killed 140,000 Japanese.

Kerry became the most senior American official to travel to city, touring its peace museum with other foreign ministers of the Group of Seven industrialized nations and laying a wreath at the adjoining park's stone-arched monument, the exposed steel beams of Hiroshima's iconic A-Bomb Dome in the distance.

The otherwise somber occasion was lifted by the presence of about 800 Japanese waving flags of the G7 nations, including that of the United States.

Kerry didn't speak publicly at the ceremony, though could be seen with his arm around Japanese Foreign Minister Fumio Kishida, a Hiroshima native, and whispering in his ear. The ministers departed with origami cranes in their respective national colors around their neck, Kerry draped in red, white and blue.

"Everyone in the world should see and feel the power of this memorial," Kerry wrote in the museum's guest book. "It is a stark, harsh, compelling reminder not only of our obligation to end the threat of nuclear weapons, but to rededicate all our effort to avoid war itself."

"War must be the last resort -- never the first choice," he added. "This memorial compels us all to redouble our efforts to change the world, to find peace and build the future so yearned for by citizens everywhere."

Kerry's appearance, just footsteps away from Ground Zero, completed an evolution for the United States, whose leaders avoided the city for many years because of political sensitivities.

No serving U.S. president has visited the site, and it took 65 years for a U.S. ambassador to attend Hiroshima's annual memorial service. Many Americans believe the dropping of atomic bombs here on Aug. 6, 1945, and on the Japanese city of Nagasaki three days later were justified and hastened the end of the war.

Nevertheless, Japanese survivors' groups have campaigned for decades to bring leaders from the U.S. and other nuclear powers to see Hiroshima's scars as part of a grassroots movement to abolish nuclear weapons.

As Kerry expressed interest, neither Japanese government officials nor survivor groups pressed for the U.S. to say sorry. And a senior American official traveling with Kerry said no apology would occur.

"And while we will revisit the past and honor those who perished, this trip is not about the past," Kerry said as he met with Kishida. "It's about the present and the future particularly, and the strength of the relationship that we have built, the friendship that we share, the strength of our alliance and the strong reminder of the imperative we all have to work for peace for peoples everywhere."

President Obama himself may travel to Hiroshima next month.

The president still hasn't made a final decision about visiting the city and its memorial when he attends a Group of Seven meeting of leaders in central Japan in late May, according to the senior U.S. official, who wasn't authorized to speak publicly on the matter and demanded anonymity. During his first year in office, Mr. Obama said he would be "honored" to do so.

The museum includes harrowing images of the destruction and shocking exhibits, including the torn clothing of children who perished and skin, fingernails, deformed tongues and other horrible examples of the exposure to the blast and its residual radiation.

Some explanations mounted on the wall, however, don't align with the views of all historians and experts in the United States or elsewhere.

For example, one suggests that the U.S. used the weapon in part to justify the extraordinary costs of the Manhattan Project to develop it. Disagreements over motivations and possible justification rage among historians, ethicists and others to this day.