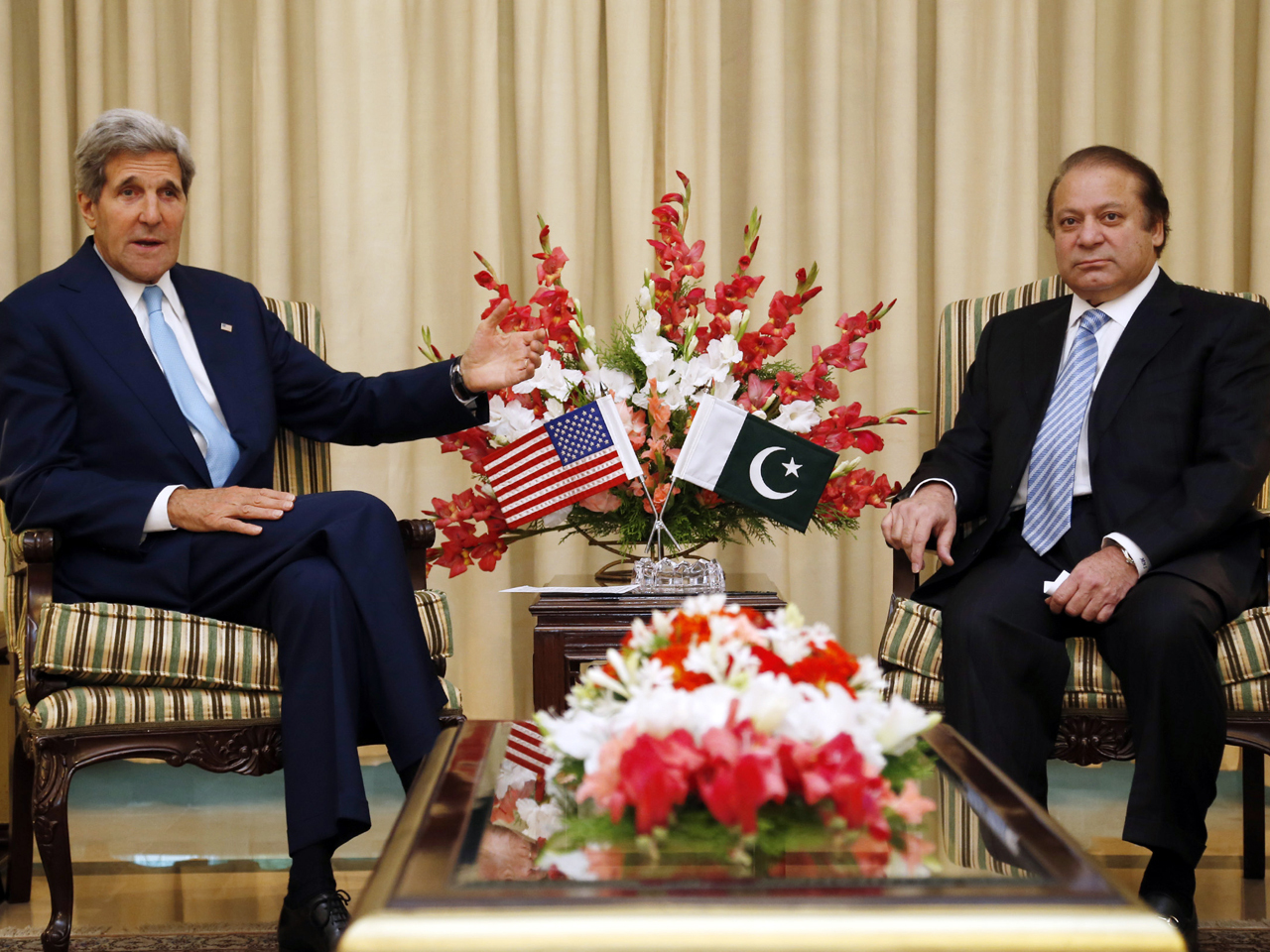 "I'm pleased to announce that today, very quickly, we were able to agree to a resumption of the strategic dialogue in order to foster a deeper, broader and more comprehensive partnership between our countries," Kerry said at a news conference with Aziz in Islamabad.

He said the talks will cover "all of the key issues between us, from border management to counterterrorism to promoting U.S. private investment and to Pakistan's own journey to economic revitalization."

Kerry told Pakistani TV that the U.S. would end strikes on Pakistan in the near future.

"I believe that we're on a good track. I think the program will end as we have eliminated most of the threat and continue to eliminate it," Kerry said.

"I think the president has a very real timeline, and we hope it's going to be very, very soon."

The comments reflected similar statements Mr. Obama made in his foreign policy speech at the National Defense University earlier this year.

"As we continue the transition in Afghanistan, we will no longer have the same need for force protection in the Afghan war theater and the progress we've made against core al Qaeda will reduce the need for unmanned strikes," State Department spokeswoman Jen Psaki said, noting there was "no exact timeline to provide."

The U.S. and Pakistan launched high-level talks on a wide swath of security and development programs in 2010. But the talks stalled in November 2011 after U.S. airstrikes on a Pakistani post on the Afghan border accidentally killed 24 Pakistani soldiers. Even before that, the bilateral relationship was severely damaged by a variety of incidents, including a CIA contractor shooting to death two Pakistanis in the eastern city of Lahore and the covert U.S. raid that killed Osama bin Laden in Pakistani town of Abbottabad.

The resumption of the strategic dialogue indicates that the relationship between the two countries has improved since that low point. But there is still significant tension and mistrust, especially regarding U.S. drone strikes and Pakistan's alleged ties with Taliban militants using its territory to launch cross-border attacks against American troops in Afghanistan.

"It is also no secret that along this journey in the last few years we've experienced a few differences," Kerry said. "I think we came here today, both the prime minister and myself, with a commitment that we cannot allow events that might divide us in a small way to distract from the common values and the common interests that unite us in big ways."

Kerry was also asked about progress on a bilateral security agreement with Afghanistan that would keep some U.S. forces in that country after 2014.

"I am personally confident that we will have an agreement, and the agreement will be timely," he replied. "And I am confident that the president has ample space here within which to make any decisions he wants to make regarding future troop levels."

Sharif came to power in an election that marked the first time in Pakistan that a civilian government completed its full five-year term and transferred power in democratic elections. The country has a history of civilian leaders being overthrown in military coups.

"This is a historic transition that just took place," Kerry told U.S. Embassy employees. "Nobody should diminish it."

Senior administration officials traveling with Kerry told reporters that while relations with Pakistan have grown touchy in recent years, there is the prospect of resetting those ties with Sharif's government and working together on major issues — counterterrorism, energy, regional stability, economic reforms, trade and investment. The officials spoke on condition of anonymity because they weren't authorized to publicly discuss Kerry's agenda.

The U.S. wants to help strengthen the role of the civilian government in Pakistan, where the military long has been dominant, and wants Sharif to tackle rising extremist attacks inside his country.

The prison break this week that freed hundreds of inmates raises serious questions about Pakistan's ability to battle an insurgency that has raged for years and killed tens of thousands. Suspected Islamic militants killed at least 160 people during the new government's first month in office. Sharif's government has not articulated an alternate strategy.

Officials in neighboring Afghanistan are demanding that Pakistan dismantle extremists' havens inside Pakistan and push the Taliban to join the peace process. Both the U.S. and Afghanistan say that if attacks are allowed to continue, the region will never become stable. Pakistani officials say they do not control the Taliban, but Karzai's government isn't convinced.

Drone strikes are another point of contention.

Washington says it needs to attack dangerous militants with drones because Pakistan's government refuses to engage them militarily. Pakistan contends the drone strikes are a fresh violation of its sovereignty, and they have increased widespread anti-American sentiment in the country.

The United States has reduced the number of drone attacks against militants in Pakistan and limited strikes to top targets. These moves appear to have appeased Pakistan's generals for now, U.S. officials said. But some officials worry about pushback from the new civilian officials, including Sharif, who wants the attacks ended.

After Kerry wraps up his meetings in Islamabad, he is scheduled to fly to London. The State Department said he will meet there with United Arab Emirates Foreign Minister Abdullah bin Zayed Al-Nahyan to discuss Egypt, Syria and Middle East peace.