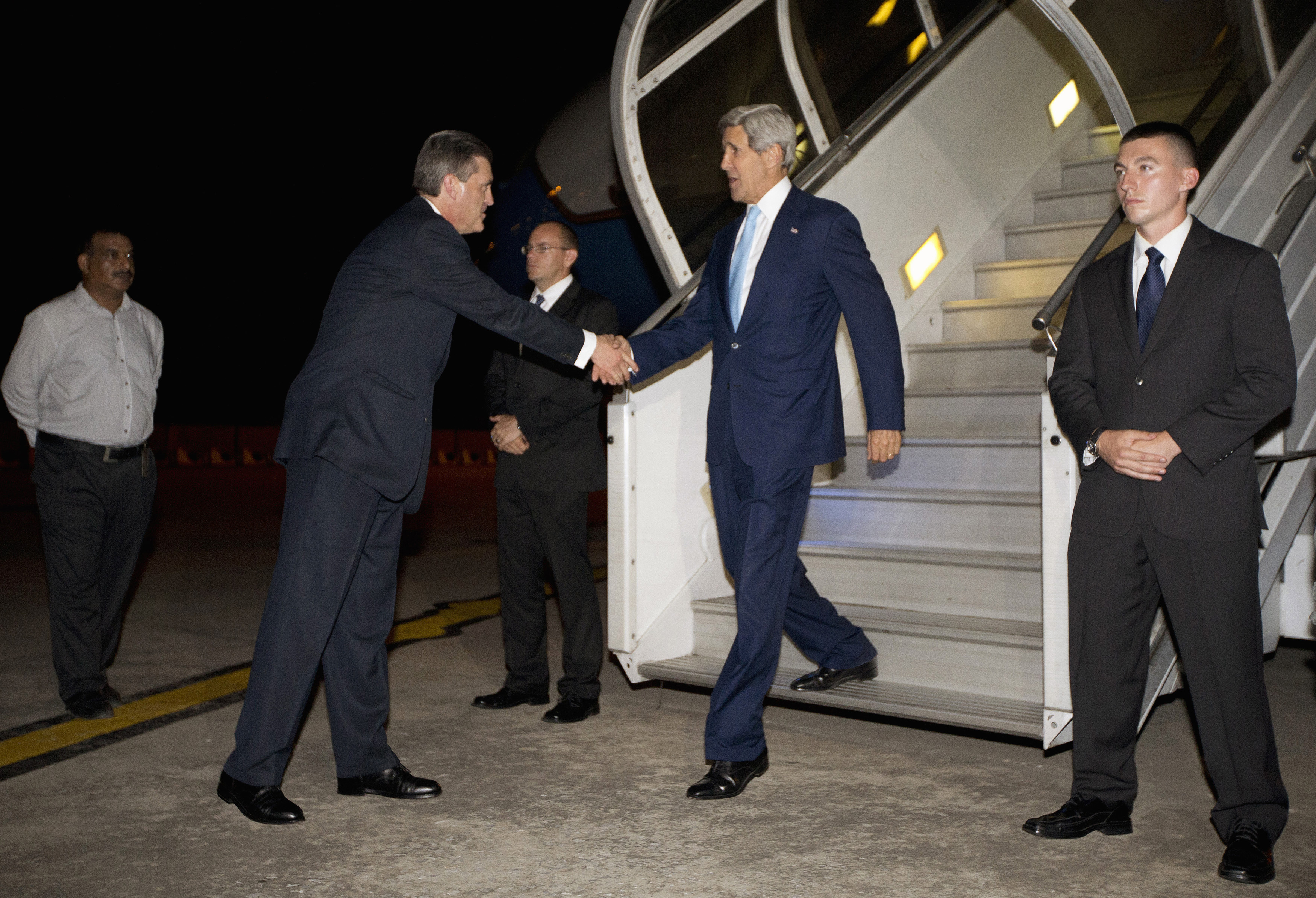 ISLAMABAD A new set of players but the same lingering issues are confronting John Kerry on his first visit to Pakistan as U.S. secretary of state: the fight against extremism, American drone attacks inside the country and the war in Afghanistan.

The Obama administration hasn't sent its top diplomat to Pakistan since 2011, and Kerry's trip is a chance for the former senator to get to know the newly elected prime minister, Nawaz Sharif, who came to power in Pakistan's first transition between civilian governments.

Kerry arrived in Islamabad on Wednesday evening, and planned meetings Thursday with civilian and military leaders, including Sharif.

Senior administration officials traveling with Kerry told reporters that while relations with Pakistan have grown touchy in recent years, there is the prospect of resetting those ties with Sharif's government and working together on major issues - counterterrorism, energy, regional stability, economic reforms, trade and investment. The officials spoke on condition of anonymity because they weren't authorized to publicly discuss Kerry's agenda.

The U.S. wants to help strengthen the role of the civilian government in Pakistan, where the military long has been dominant, and wants Sharif to tackle rising extremist attacks inside his country.

The prison break this week that freed hundreds of inmates raises serious questions about Pakistan's ability to battle an insurgency that has raged for years and killed tens of thousands.

"The U.S.-Pakistan relationship is badly in disrepair. It has been for some time, and the Pakistanis don't seem to be in any hurry to fix it," said Bruce Riedel, a senior fellow at Brookings Institution who has served as a senior adviser to the past four U.S. presidents.

Relations took a hit after the U.S. raid in 2011 that killed Osama bin Laden in his compound in Abbotabad, Pakistan. Pakistanis felt the raid violated their country's sovereignty.

While the U.S. is seeking quick responses to its concerns, Sharif is moving slowly, Riedel said, noting that the prime minister has yet to name an ambassador to the United States.

Suspected Islamic militants killed at least 160 people during the new government's first month in office. Sharif's government has not articulated an alternate strategy.

Some Pakistani military and intelligence leaders see the U.S. troops leaving Afghanistan, know the American public and U.S. Congress want out of the war, and would be OK with seeing the Taliban retake control of Afghanistan, Riedel said. Pakistani officials will give "lip service" to the idea of reconciliation with the Taliban, he said, but will refrain from acting, which will allow the insurgents to remain strong in southern and eastern Afghanistan.

Adding to Kerry's problems is the recent collapse of U.S.-Taliban talks before they began at the insurgent group's political office in Doha, Qatar, and Karzai's decision to suspend talks with the U.S. over a bilateral security agreement. Without such a deal, the U.S. will not be able to keep troops in Afghanistan after the U.S.-led NATO combat mission ends at the close of 2014.

Kerry planned to for better relations between Islamabad and Kabul. Karzai has announced his intent to visit Pakistan soon, but previous bilateral meetings have yielded little.

Kerry has a long history of dealing with Pakistan. As chairman of the U.S. Senate Foreign Relations Committee, Kerry was a main sponsor of a 2010 law that boosted U.S. assistance to Pakistan to $1.5 billion a year until 2014. The Obama administration enlisted Kerry to help arrange the release of a CIA contractor who was arrested in Pakistan after killing two men in 2011.

Officials in neighboring Afghanistan are demanding that Pakistan dismantle extremists' havens inside Pakistan and push the Taliban to join the peace process. Both the U.S. and Afghanistan say that if attacks are allowed to continue, the region will never become stability. Pakistani officials say they do not control the Taliban, but Karzai's government isn't convinced.

Drone strikes are another point of contention. Washington says it needs to attack dangerous militants with drones because Pakistan's government refuses to engage them militarily. Pakistan contends the drone strikes are a fresh violation of its sovereignty, and they have increased widespread anti-American sentiment in the country.

The United States has reduced the number of drone attacks against militants in Pakistan and limited strikes to top targets. These moves appear to have appeased Pakistan's generals for now, U.S. officials said. But some officials worry about pushback from the new civilian officials, including Sharif, who wants the attacks ended.

While the number has fallen, it's unclear whether the strikes were curtailed only in deference to Pakistan or because there are top targets left, said Jonah Blank, senior international policy analyst at the RAND Corp., a nonprofit, nonpartisan think tank.