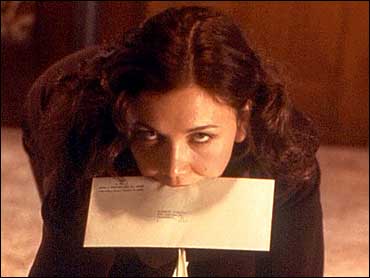 In the new film, "Secretary," actress Maggie Gyllenhaal gives what many critics are calling a breakthrough performance, as a self-abusing young woman looking for self esteem, but finding much more at the hands of her demanding new boss.

Gyllenhaal visits The Early Show to discuss the controversial Lions Gate film that was a 2002 Sundance Film Festival winner.

"Secretary," billed as a black comedy, is loosely based on a short story from Mary Gaitskill's fictional collection, "Bad Behavior." Gyllenhaal's character, Lee Halloway, lands a job working as a secretary for E. Edward Grey (James Spader) in his small-town law firm. She slowly engages in a sadomasochistic relationship with her boss and abandons her fiancée.

Gyllenhaal next project will be in Spike Jones' movie about writing a film called "Adaptation." She will also be seen in John Sayles' "Casa de Los Babys."