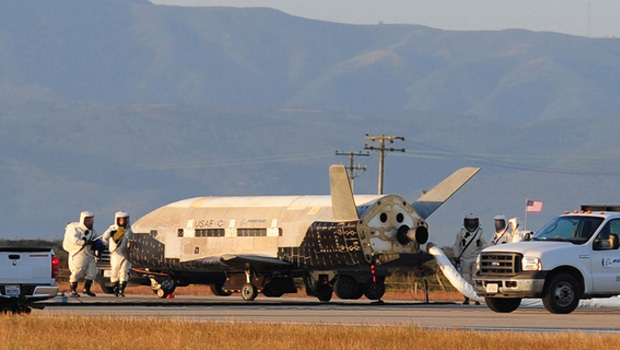 The military's small, top-secret version of the space shuttle rocketed into orbit Tuesday for a repeat mystery mission, two years after making the first flight of its kind.

The Air Force launched the unmanned spacecraft Tuesday hidden on top of an Atlas V rocket. As if on cue, clouds quickly swallowed up the rocket as it disappeared out over the ocean.

It is the second flight for this original X-37B spaceplane. The craft circled the planet for seven months in 2010. A second X-37B spacecraft spent more than a year in orbit.

These high-tech mystery machines -- 29 feet long -- are about one-quarter the size of NASA's old space shuttles and can land automatically on a runway. The two previous touchdowns occurred in Southern California; this one might end on NASA's three-mile-long runway once reserved for the space agency's shuttles.

The military isn't saying much if anything about this new secret mission known as OTV-3, or Orbital Test Vehicle, flight No. 3. In fact, launch commentary ended 17 minutes into the flight and a news blackout followed.

But one scientific observer, Jonathan McDowell of the Harvard-Smithsonian Center for Astrophysics, speculates the spaceplane is carrying sensors designed for spying and likely is serving as a testbed for future satellites. He dismisses rumors of "exotic ideas" for the X-37B as weaponry or shadowing a Chinese satellite.

While acknowledging he does not know what the spaceplane is carrying, McDowell said on-board sensors could be capable of imaging or intercepting transmissions of electronic emissions from terrorist training sites in Afghanistan or other hot spots. "All the sorts of things that spy satellites generally do," he said.

The beauty of a reusable spaceplane is that it can be launched on short notice based on need, McDowell said.

What's important about this flight is that it is the first reflight.

"That is pretty cool," McDowell said, "reusing your spacecraft after a runway landing. That's something that has only really been done with the shuttle."

Now retired museum pieces, NASA's space shuttles stretch 122 feet long, and have 78-foot wingspans and weights of more than 170,000 pounds. They were launched, from 1981 to 2011, with two strap-on booster rockets and an external fuel tank feeding three main engines. The X-37B wingspan is 15 feet, and the 11,000-pound, Boeing-built vessel requires the United Launch Alliance's hefty Atlas V for hoisting. It is solar powered.

The two previous secret X-37B flights were in 200-plus-mile-high orbits, circling at roughly 40-degree angles to the equator, as calculated by amateur satellite trackers. That means the craft flew over the swatch between 40 degrees or so north latitude and 40 degrees or so south latitude.

That puts Russia's far north out of the spaceplane's observing realm, McDowell noted.

"It might be studying Middle Eastern latitudes or it might just be being used for sensor tests over the United States," he said.

McDowell speculates that this newest flight will follow suit.

The International Space Station, by comparison, orbits about 250 miles (400 kilometers)high but at a much steeper 51.6-degree inclination, or angle to the equator, that covers more territory.

The X-37B program, which dates back to 1999, is operated by the Air Force Rapid Capabilities Office and geared toward space experimentation.

Some scientists - like Laura Grego of the Union of Concerned Scientists - argue the Air Force could accomplish the same objectives by using cheaper, more efficient spacecraft that either burn up on entry or parachute down.

"The ability to return to Earth carries a high price," Grego said in a statement.

Government's "all hands on deck" plan to save the bees