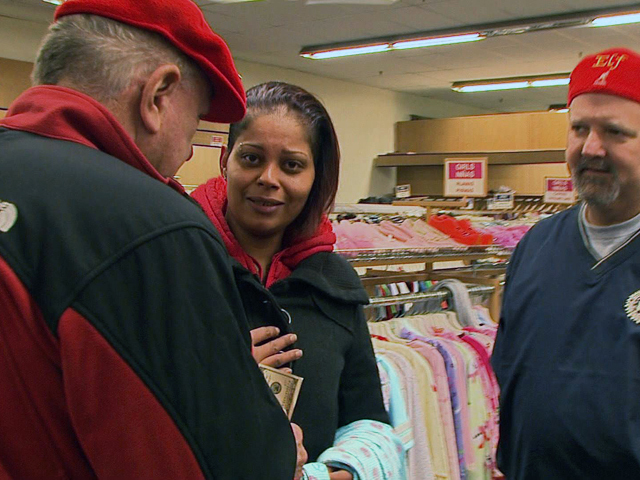 (CBS News) STATEN ISLAND, N.Y. -- Even though she has a three-year-old, Janice Kennedy had no interest in celebrating Christmas this year. That was her feeling after Superstorm Sandy destroyed her home.

"It's just -- how am I going to do that? I don't have anything left," Janice says of how she felt after the storm struck.

She hated that they were even selling Christmas trees in her neighborhood. That's just how down some people are on Staten Island, N.Y., and neighboring New Jersey, where Sandy hit hardest.

Which is exactly why Secret Santa is here.

His face and his real name can't be revealed. All we can say is that he's a wealthy businessman from Missouri who every December goes to the cities and towns in America he thinks need him most.

He then gives away $100 bills -- about $100,000 worth -- all to random strangers he finds in thrift stores, laundromats and soup kitchens.

Asked what she would do with the money she received in a soup kitchen, one woman responded, "Buy food."

A lot of these people have never even seen a $100 bill, let alone possessed one. Yet clearly, the joy they feel goes a lot deeper than the dollar amount.

"Don't lose hope, because everything is going to be OK," Secret Santa said as he comforted another woman.

Carol Hefty had five feet of water in her house after Sandy. Secret Santa told her he knew she would rebuild.

Carol could certainly use the money but said the kindness this represents matters more.

"This will not be spent," she said. "I'm going to frame it and put it in my house to remember all the wonderful people."

Hope: that's really what he doles out. And perhaps no one needed that more than the woman Santa just so happened to stumble upon in a Salvation Army.

He gave Janice Kennedy $300 and a brand-new attitude.

"It just changed everything," she said. "I thought, 'We'll get the tree,' and I got happy. For some reason, I had a smile on my face all night."

The Storm after the Storm
More
Steve Hartman