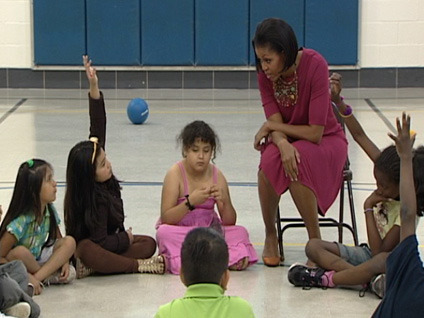 Democrats and Republicans continue to trade barbs over the Arizona's new, controversial immigration law and federal reform efforts, but First Lady Michelle Obama today saw the personal side of the debate, from the perspective of a child.

Obama today traveled with Mexican First Lady Margarita Zavala to the New Hampshire Estates Elementary School in Silver Spring, Maryland, where a second-grade girl asked her about how immigration reform would impact her family.

"My mom... she says that Barack Obama is taking everybody away that doesn't have papers," the girl said, sitting cross-legged on the gymnasium floor with her classmates, while Obama sat in a folding chair next to them. A large blue banner hanging behind them, adorned with the American and Mexican flags, read, "Welcome, Mrs. Obama! Bienvenidos, Sra. Zavala!"

"Yeah, well that's something that we have to work on, right?" Obama said. "To make sure that people can be here with the right kind of papers, right? That's exactly right."

The little girl continued, "But my mom doesn't have any papers."

Obama replied, "Well, we have to work on that. We have to fix that, and everybody's got to work together in Congress to make sure that happens."

President Obama today said he agreed with Mexican President Felipe Calderon that the Arizona law, which makes it a state crime to be in the country illegally, could be applied in a discriminatory fashion.

He called it a "misdirected expression of frustration over our broken immigration system."

He said that he is "sympathetic" to the frustrations of Americans growing impatient with the federal government's failure to address immigration reform. He said he supports a plan that includes creating an orderly border, making sure businesses are following the rules and not "actively recruiting undocumented workers" in order to skirt laws and protections, and making sure there is accountability for those living in the United States illegally.