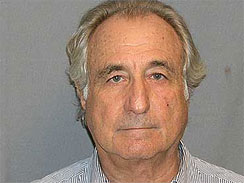 The Securities and Exchange Commission reached a settlement with Bernard Madoff today that will keep him from ever working again in the securities industry.

Of course, that's just a formality, given that Madoff is currently in prison and may spend much of the rest of his life there. His sentencing for running a more than $60 billion Ponzi scheme is scheduled for the end of the month.

The judge deciding Madoff's sentence was flooded with the e-mails and letters - 113 tales of devastating loss.

Heart wrenching stories like Kathleen Bignell's of Gunnison, Colo., who wrote, "I told my father (89) he could not die because I didn't have enough money to bury him."

Others who lost a lifetime of savings called Madoff a "bastard" and "scum." Richard Shapiro said he felt "economically raped" "sentenced to a life devoid of our life savings."

Calls for punishment were unanimous - insisting on the maximum sentence, no less. CBS News caught up with Madoff's wife Ruth, after visiting her husband in jail.

"I have no comments at this time on any subject," she said.