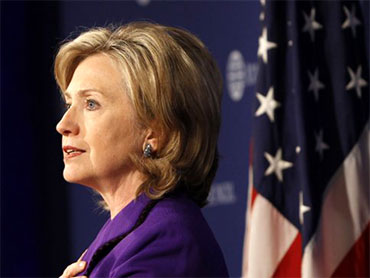 Secretary of State Hillary Rodham Clinton's weeklong, five-nation tour of Latin America is certain to focus on the earthquake in Chile while she also tries to build support for fresh penalties against Iran.

The itinerary released before the quake Saturday included a visit to Santiago, Chile's capital, beginning Monday night. On Sunday the State Department said the plan had changed and a scheduled dinner with Chilean President Michelle Bachelet has been canceled.

Instead on Tuesday, Clinton will briefly visit Santiago, Chile's capital, before traveling to Brasilia, Brazil.

"Our hemisphere comes together in times of crisis, and we will stand side-by-side with the people of Chile in this emergency," Clinton said Saturday after President Barack Obama called President Bachelet to offer assistance.

Clinton starts her trip in Uruguay at Monday's inauguration of the country's new president, ex-guerrilla Jose Mujica. Mujica's election in November won praise from other left-leaning populist leaders in the region, including Venezuela's Hugo Chavez, a perennial thorn in the side of the U.S. who is cultivating closer ties with Iran.

In the Uruguayan capital of Montevideo, Clinton will see Mujica and Argentine President Cristina Fernandez. U.S. officials say she has no plans for separate meetings with other inauguration guests - for example Chavez or other like-minded leftist leaders such as Ecuador's Rafael Correa or Bolivia's Evo Morales.

The Obama administration has been pleased by Uruguay's contributions to U.N. peacekeeping forces and Argentina's stance on Iran's nuclear program, and Clinton will encourage Mujica and Fernandez to continue those policies, U.S. officials said.

Fernandez may raise Argentina's dispute with Britain over the Falkland Islands, but Clinton is not expected to bring it up. "This is a matter for Argentina and for Britain and it's not a matter for the United States to make a judgment on," the top U.S. diplomat for the Americas, Arturo Valenzuela, said Friday.

Clinton's visit to Chile was intended to showcase U.S. enthusiasm for Bachelet's message of social inclusion, particularly women's empowerment. It may take on more urgency as Chile struggles to recover from the quake. Clinton also visited Haiti days after a powerful earthquake hit that nation in January.

In Brazil, the chief U.S. diplomat plans talks with President Luiz Inacio Lula da Silva, whose support the U.S. is seeking for a new round of U.N. Security Council penalties against Iran over its nuclear program.

Brazil, a voting member of the Security Council, has been reluctant to additional penalties. Its leaders have expressed a desire to improve relations with Iran, and Lula plans to visit Tehran in May.

Clinton hopes to win Brazil's backing for sanctions as well as a commitment to press Iran to comply with international demands to prove that its nuclear intentions are peaceful.

"We will be telling our Brazilian counterparts that we encourage them to encourage Iran to regain the trust of the international community by fulfilling its international obligations, which we feel that they have not fulfilled," Valenzuela said before Clinton's trip.

Clinton also will attend a meeting in Costa Rica of regional foreign ministers that will focus on improving economic conditions in the hemisphere. She expects to see outgoing President Oscar Arias, who brokered an accord that ended the political crisis in Honduras last year.

Clinton will also meet with incoming Costa Rican President Laura Chinchilla before wrapping up her tour in Guatemala on Friday.

In Guatemala, Clinton will meet a group of Central American leaders, including Honduran President Porfirio Lobo, who took over in late January from an interim government that had ousted leader Manuel Zelaya in a coup last June, leading to a political crisis.