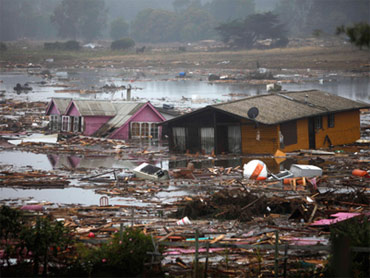 Heroism and banditry mingled on Chile's shattered streets Sunday as rescuers braved aftershocks digging for survivors and the government sent soldiers to quell looting. The death toll climbed to 708 in one of the biggest earthquakes in centuries.

CBS News correspondent Mark Strassmann reports one of the hardest-hit areas was Constitucion, a costal town located just 70 miles from the epicenter hit first by the earthquake and then 30 minutes later by the tsunami it spawned. President Michele Bachelet toured the area, where at least 350 people alone have died.

"There's believed to be many people missing that could be under the rubble," Chilean Army Col. Jorge Concha said. "And also in this area where we are now, as a result of the wave."

In the devastated city of Concepcion, firefighters pulling survivors from a toppled apartment block were forced to pause because of tear gas fired to stop looters, who were wheeling off everything from microwave ovens to canned milk at a damaged supermarket across the street.

Efforts to determine the full scope of destruction were undermined by an endless string of terrifying aftershocks that continued to turn buildings into rubble. Officials said 500,000 houses were destroyed or badly damaged, and President Bachelet said "a growing number" of people were listed as missing.

"We are facing a catastrophe of such unthinkable magnitude that it will require a giant effort" to recover, Bachelet said after meeting for six hours with ministers and generals in La Moneda Palace, itself chipped and cracked.

She signed a decree giving the military control over security in the province of Concepcion, where looters were pillaging supermarkets, gas stations, pharmacies and banks. Men and women hurried away with plastic containers of chicken, beef and sausages.

"Although the death toll in the earthquake in Chile has doubled and serious aftershocks continue to undermine relief efforts, the government has not requested a "flash appeal" or other emergency aid from the U.N.," said CBS News Foreign Affairs Analyst Pamela Falk. "But outgoing President Michele Bachelet has begun to accept offers from some donors around the world."

A spokesman for the U.N. Secretary General Ban Ki-moon, Farhan Haq, told CBS News that it is not clear whether or not the U.N. will receive a request from the government of Chile for aid, but as of late Sunday, there had been no request made.

Virtually every market and supermarket had been looted — and no food or drinking water could be found. Many people in Concepcion expressed anger at the authorities for not stopping the looting or bringing in supplies. Electricity and water services were out of service.

"We are overwhelmed," a police officer told The Associated Press.

Bachelet said a curfew was being imposed from 9 p.m. to 6 a.m. and only security forces and other emergency personnel would be allowed on the streets. Police vehicles drove around announcing the curfew over loudspeakers.

As nightfall neared, hundreds of people put up tents and huddled around wood fires in parks and the grassy medians of avenues, too fearful to return to their homes amid continuing strong aftershocks.

Bachelet, who leaves office on March 11, also said the country would accept some of the offers of aid that have poured in from around the world.

She said Chile needs field hospitals and temporary bridges, water purification plants and damage assessment experts — as well as rescuers to help relieve workers who have been laboring frantically since the magnitude-8.8 quake struck before dawn Saturday.

To strip away any need for looting, Bachelet announced that essentials on the shelves of major supermarkets would be given away for free, under the supervision of authorities. Soldiers and police will also distribute food and water, she said.

Secretary of State Hillary Rodham Clinton was due to travel to Santiago Monday night as part of a weeklong, five-nation tour of Latin America. On Sunday the State Department said the plan had changed and a scheduled dinner with Chilean President Michelle Bachelet has been canceled.

Instead on Tuesday, Clinton will briefly visit Santiago, Chile's capital, before traveling to Brasilia, Brazil.

The U.S. State Department on Sunday urged Americans to avoid tourist trips and other nonessential travel to the country. American citizens who are currently in Chile were asked to contact family and friends in the United States, whether by telephone, Internet or cell-phone text messaging.

Those without access to a telephone or the Internet were encouraged to register with the nearest U.S. Embassy or Consulate.

Bachelet said the country needs field hospitals and temporary bridges, water purification plants and damage assessment experts - as well as rescuers to help relieve workers who have been laboring frantically since the magnitude-8.8 quake struck before dawn Saturday.

To strip away any need for looting, Bachelet announced that essentials on the shelves of major supermarkets would be given away for free, under the supervision of authorities. Troops and police will also distribute food and water, she said.

Although houses, bridges and highways were damaged in Santiago, the national capital, a few flights managed to land at the airport and subway service resumed.

More chaotic was the region to the south, where the shaking was the strongest and where the quake generated waves that lashed coastal settlements, leaving behind sticks, scraps of metal and masonry houses ripped in two.

In the village of Lloca, a beachside carnival was caught in the tsunami. A carousel was twisted on its side and a ferris wheel rose above the muddy wreckage.

In Concepcion, the largest city in the disaster zone, a new, 15-story apartment building toppled onto its side. Many of those who lived on the side that wound up facing the sky could clamber out; those on the other were trapped. An estimated 60 people remained trapped in the 70-unit apartment building.

Rescuers at the scene worked carefully for fear of aftershocks. Ninety jolts of magnitude 5 or greater shuddered across the region in the first 24 hours after the quake, including one nearly as large as the earthquake that devastated Haiti on Jan. 12.

Police officer Jorge Guerra took names of the missing from a stream of tearful relatives and friends. He urged them to be optimistic because about two dozen people had been rescued.

"There are people alive. There are several people who are going to be rescued," he said — though the next people pulled from the wreckage were dead.

Pascal Bonnefoy, a journalist with GlobalPost, told "CBS Evening News" Sunday Edition anchor Russ Mitchell there has been "complete devastation" in the coastal cities and towns because of the tidal wave.

Bonnefoy said a shortage of water has been the main problem in those areas.

"It's sad, but because of the situation you have to confront the robberies and at the same time continue the search," Guerra said.

The sound of chain saws, power drills and sledgehammers breaking through concrete competed with the whoosh of a water cannon fired at looters and the shouts of crowds that found new ways into a four-story supermarket each time police retreated.

One woman ran off with a shopping cart piled high with slabs of unwrapped meat and cheese. A shirtless man carried a mattress on his head. Some of the looters pitched rocks at police armored vehicles outside the Lider market, which is majority-owned by Wal-Mart Stores Inc.

Across the Bio Bio River in the city of San Pedro, looters cleared out a shopping mall. A video store was set ablaze, two automatic teller machines were broken open, a bank was robbed and a supermarket emptied, its floor littered with mashed plums, scattered dog food and smashed liquor bottles.

"It was a mob. They looted everything," said police Sgt. Rene Gutierrez, 46, who had his men guarding the now-empty mall. "Now we're only here to protect the building - what's left of the building."

He said police had been slow to reach the looted mall because one bridge over the river was collapsed and the other so damaged they had to move cautiously.

Ingenious looters even used long tubes of bamboo and plastic to siphon gasoline from underground tanks at a closed gasoline station. Others rummaged through the station's restaurant.

Thieves attacked a flour mill in Concepcion - some toting away bags on their shoulders, others using bicycles or cars. One man packed a school bus with sacks of flour.

Many defended the scavenging — of food if not television sets — as a necessity because officials had not brought food or water. Even Concepcion's mayor, Jacqueline van Rysselberghe, complained that no food aid was reaching the city. She said the federal government should send troops to help halt the looting.

In Talca, where old adobe buildings in the town center were flattened, many spent the night outside, huddled beneath blankets on lawn chairs, sleeping on a mattress hauled from a damaged home or sheltering in camping tents.

State television showed scenes of devastation in coastal towns and more still on Robinson Crusoe Island, where it said the tsunami drove almost 2 miles (3 kilometers) into the town of San Juan Bautista. Officials said at least five people were killed there and more were missing.

The surge of water raced across the Pacific, setting off alarm sirens and evacuations from Hawaii to Japan, but it did little damage.