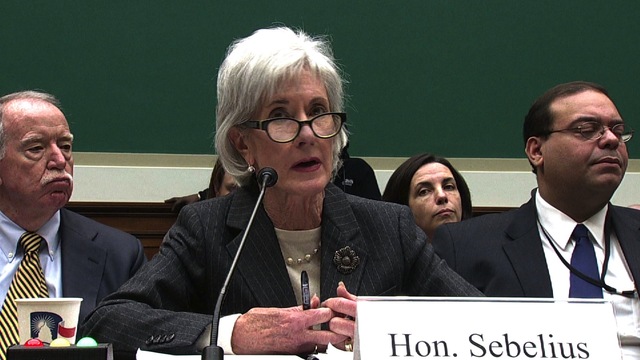 Some back-end portions of HealthCare.gov won't be fully functional until mid-January, Health and Human Services Secretary Kathleen Sebelius told Congress Wednesday, but she assured them that customers enrolled on the federal website will get full coverage -- and their promised subsidies -- starting on January 1.

"The financial management system, which is getting the insurance companies their money for accelerated tax credits and cost-sharing, is due to go into effect in mid-January," Sebelius told a subpanel of the House Energy and Commerce Committee. She explained, "This is reimbursing insurance companies -- it has nothing to do with enrollment."

If a customer enrolled in Obamacare is eligible for subsidies, those government payments go directly to the insurer, and then the insurer passes on the savings to the customer in the form of lower premiums. HHS is still working to fully automate that payment system to insurers, Sebelius explained. Until then, insurers participating in the Obamacare marketplaces have signed off on a system to ensure they're paid in a "timely fashion."

"There's a manual workaround for virtually everything that isn't fully automated yet," Sebelius said.

Nevertheless, Rep. Joe Barton, R-Texas, said he predicted Sebelius would be back before the committee in mid-January to explain more problems with HealthCare.gov. The secretary took a number of tough and at times angry questions from Republicans on the committee -- Rep. John Shimkus, R-Ill., declared at one point that questioning her was "like talking to the Republic of Korea or something."

Sebelius acknowledged that the Oct. 1 launch of HealthCare.gov, which serves as a portal to the new Obamacare marketplaces in 36 states was "flawed and failed and frustrating."

Had she known the HealthCare.gov rollout would be so flawed, she would've done things differently, she said. "I would have probably done a slower launch with fewer people and done some additional beta testing."

Report: Obamacare sign-ups surge as open enrollment begins
More
In addition to continuing work on HealthCare.gov's payment systems, Sebelius said that HHS is attempting to ensure that individuals who enrolled in Obamacare weeks earlier -- when the site was more dysfunctional -- are, in fact, signed up for coverage. Because of a glitch on the site, insurers complained they were receiving incorrect information -- or in some cases, no information at all -- from HealthCare.gov users who thought they had successfully enrolled in private plans. Administration officials said that one specific bug, which is now fixed, accounted for 80 percent of those problems.

Sebelius said HHS is now in the process of "hand matching" individuals with insurers. "We are seeing a vastly improved system, but we want to go back and make sure everyone who thinks they are enrolled is matched with a company," she said.

The secretary noted that HHS has dedicated $677 million for HealthCare.gov's total IT costs through the end of October. Of that amount, $319 million has been spent so far, she said. Rep. Marsha Blackburn, R-Tenn., asked whether HHS will request the contractors who initially built the flawed site to pay back the taxpayers who footed the bill, Sebelius noted that she's asked the HHS inspector general to investigate the contracting process.

"I will act based on his recommendations," she said.

In the meantime, Sebelius noted that HealthCare.gov has made "great progress" since its botched launch. Pages that once took 8 seconds to load are now responding in under a second, and the site's error rate is now under 1 percent.

Users, she said, are "finding the experience is night and day compared to where we were in October... It's now easier than ever."

HHS reported Tuesday evening that nearly 365,000 individuals nationwide are now signed up for private Obamacare plans, while an additional 1.9 million people have applied and been deemed eligible, but they have yet to select a plan. Sebelius noted Wednesday that the open enrollment period lasts through March.