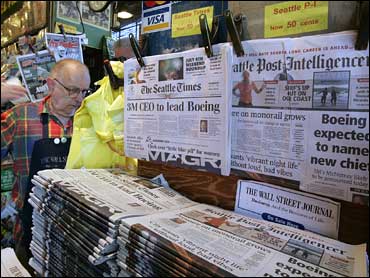 When Hillary Clinton clinched the Democratic presidential nomination on Tuesday, making her the first woman presidential nominee of a major party in U.S. history, multiple major newspapers chose to run with a front-page photograph of former President Bill Clinton.

The Seattle Times was one of the newspapers that ran with a photograph of Bill's stump speech, and they, along with others, were accused of sexism on social media for the editorial decision.

The Times issued a formal apology to its online readers Wednesday afternoon and print readers Thursday.

"Wednesday's front page, which featured a banner headline,'Clinton makes history with formal nomination,' failed to include a photograph of Hillary Clinton, the first woman to lead a major-party ticket, instead putting the visual focus on former President Bill Clinton, who made an impassioned case for her election as the next president. The omission upset many readers. In hindsight, we focused too much on the live moment and not enough on the history being made. We apologize for missing the mark."

Other publications that published front page photographs of Bill Clinton, as opposed to Hillary Clinton, include The Washington Post, The Houston Chronicle, The Chicago Tribune and The Wall Street Journal.

Newspapers such as The New York Times and USA Today selected either a picture of Hillary supporters or a picture of the candidate's live video feed being broadcasted on the Wells Fargo Arena big screen.