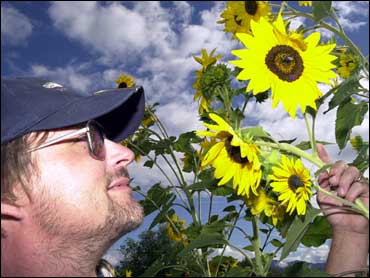 The capital's famous cherry trees are primed to burst out in a perfect pink peak about the end of this month. Thirty years ago, the trees usually waited to bloom till around April 5.

In central California, the first of the field skipper sachem, a drab little butterfly, was fluttering about on March 12. Just 25 years ago, that creature predictably emerged there anywhere from mid-April to mid-May.

And sneezes are coming earlier in Philadelphia. On March 9, when allergist Dr. Donald Dvorin set up his monitor, maple pollen was already heavy in the air. Less than two decades ago, that pollen couldn't be measured until late April.

Pollen is bursting. Critters are stirring. Buds are swelling. Biologists are worrying.

"The alarm clock that all the plants and animals are listening to is running too fast," Stanford University biologist Terry Root said.

The fingerprints of man-made climate change are evident in seasonal timing changes for thousands of species on Earth, according to dozens of studies and last year's authoritative report by the Nobel Prize-winning international climate scientists. More than 30 scientists told The Associated Press how global warming is affecting plants and animals at springtime across the country, in nearly every state.

What's happening is so noticeable that scientists can track it from space. Satellites measuring when land turns green found that spring "green-up" is arriving eight hours earlier every year on average since 1982 north of the Mason-Dixon line. In much of Florida and southern Texas and Louisiana, the satellites show spring coming a tad later, and bizarrely, in a complicated way, global warming can explain that too, the scientists said.

Biological timing is called phenology. Biological spring, which this year begins at 1:48 a.m. EDT Thursday, is based on the tilt of the Earth as it circles the sun. The federal government and some university scientists are so alarmed by the changes that last fall they created a National Phenology Network at the U.S. Geological Survey to monitor these changes.

The idea, said biologist and network director Jake Weltzin, is "to better understand the changes, and more important what do they mean? How does it affect humankind?"

There are winners, losers and lots of unknowns when global warming messes with natural timing. People may appreciate the smaller heating bills from shorter winters, the longer growing season and maybe even better tasting wines from some early grape harvests. But biologists also foresee big problems.

The changes could push some species to extinction. That's because certain plants and animals are dependent on each other for food and shelter. If the plants bloom or bear fruit before animals return or surface from hibernation, the critters could starve. Also, plants that bud too early can still be whacked by a late freeze.

The young of tree swallows - which in upstate New York are laying eggs nine days earlier than in the 1960s - often starve in those last gasp cold snaps because insects stop flying in the cold, ornithologists said. University of Maryland biology professor David Inouye noticed an unusually early February robin in his neighborhood this year and noted, "Sometimes the early bird is the one that's killed by the winter storm."

The checkerspot butterfly disappeared from Stanford's Jasper Ridge preserve because shifts in rainfall patterns changed the timing of plants on which it develops. When the plant dries out too early, the caterpillars die, said Notre Dame biology professor Jessica Hellmann.

"It's an early warning sign in that it's an additional onslaught that a lot of our threatened species can't handle," Hellmann said.

It's not easy on some people either. A controlled federal field study shows that warmer temperatures and increased carbon dioxide cause earlier, longer and stronger allergy seasons.

"For wind-pollinated plants, it's probably the strongest signal we have yet of climate change," said University of Massachusetts professor of aerobiology Christine Rogers. "It's a huge health impact. Seventeen percent of the American population is allergic to pollen."

While some plants and animals use the amount of sunlight to figure out when it is spring, others base it on heat building in their tissues, much like a roasting turkey with a pop-up thermometer. Around the world, those internal thermometers are going to "pop" earlier than they once did.

This past winter's weather could send a mixed message. Globally, it was the coolest December through February since 2001 and a year of heavy snowfall. Despite that, it was still warmer than average for the 20th century.

Phenology data go back to the 14th century for harvest of wine grapes in France. There is a change in the timing of fall, but the change is biggest in spring. In the 1980s there was a sudden, big leap forward in spring blooming, scientists noticed. And spring keeps coming earlier at an accelerating rate.

Unlike sea ice in the Arctic, the way climate change is tinkering with the natural timing of day-to-day life is concrete and local. People can experience it with all five senses: