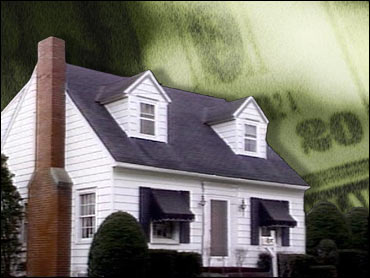 Because it's not going to warm up anytime soon, the right time to winterize your home is now. It's never too late to insulate your home against the harsh winter weather.

The Saturday Early Show went to Paramus, N.J. to winterize a home with the help of Rent-a-Husband Kaile Warren.

Homeowner Tisha Licini called Warren to help fix the draft problems in her home. The first place Licini noticed a draft was in the kitchen.

"[The hole] was right here underneath my sink," said Licini. "I saw the light of day at the end of my drain. So we stuffed a rag there, temporarily."
Warren says a permanent solution to the problem can be made with only the cost of a few extra dollars. But first, he explains, to winterize the home, you always start in the basement and work your way up through the home - providing you do have a basement.

Typically, unfinished parts of a basement are where you will find the most drafts, because things haven't been sealed off. To help locate some leaks, look for cobwebs.

"Spiders will typically build their webs in the line of a draft because they realize it helps pull their prey into their nest," says Warren.

Before the repair could be made, Warren cleared away the cobwebs with a clean dry cloth. He then filled the hole using an insulating foam sealant, which expands to fit the size of the opening. Because the sealant is both tacky and flammable, Warren says be sure to wear gloves and safety goggles.

Licini's next draft problem was located at the gap around her windows. To fix the draft problem, Warren measured, cut and applied foam rubber tape to the space around the perimeter of the window.

The door leading from Tisha's garage (a common draft area often overlooked) also needed attention. Warren says a weather stripping kit, which can be purchased at your local home improvement store, is the solution. He fastened it with screws along the edge of the doorframe. He then added a door sweep to the door's bottom, as well.

Warren next inspected a bedroom that seemed colder than the rest of the house.

"Wherever you have exterior outlets on exterior walls, always check there first," says Warren. "And to check, simply take a piece of toilet paper and hold it up in front of the outlet."

To fix that draft problem, Warren turned off the breaker. Then, he removed the outlet cover with a screwdriver, and using a foam liner specially designed for electrical applications, place d it into the cover. He then screwed the cover back onto the outlet. Warren says this needs to be done only to outlets on the exterior walls of your home.

Warren noticed another draft coming from the air conditioner.

"This thing is still emitting cold air even though it's unplugged," he said.

To correct this draft, Warren measured the width and length of the air conditioner, cut foam strips to size and placed the strips over the open seams around the air conditioner's perimeter. Then he covered the outside of the unit with a sheet of plastic that is six millimeters thick. After he made a snug fit around the entire unit, he fastened the plastic in place with some duct tape. Warren says air conditioner covers can be purchased, but they can be hard to find and the plastic is more economical.

Warren and Licini eventually made their way to where they started, in the kitchen. Warren repaired the hole under the kitchen sink just like the pipe in the basement, by spraying an insulating foam sealant around the pipe. He then applied a generous amount of sealant that, when dry, can be trimmed with a knife.

To suggest a topic for our Rent-A-Husband, or have the opportunity to have your house featured on the program, click here.