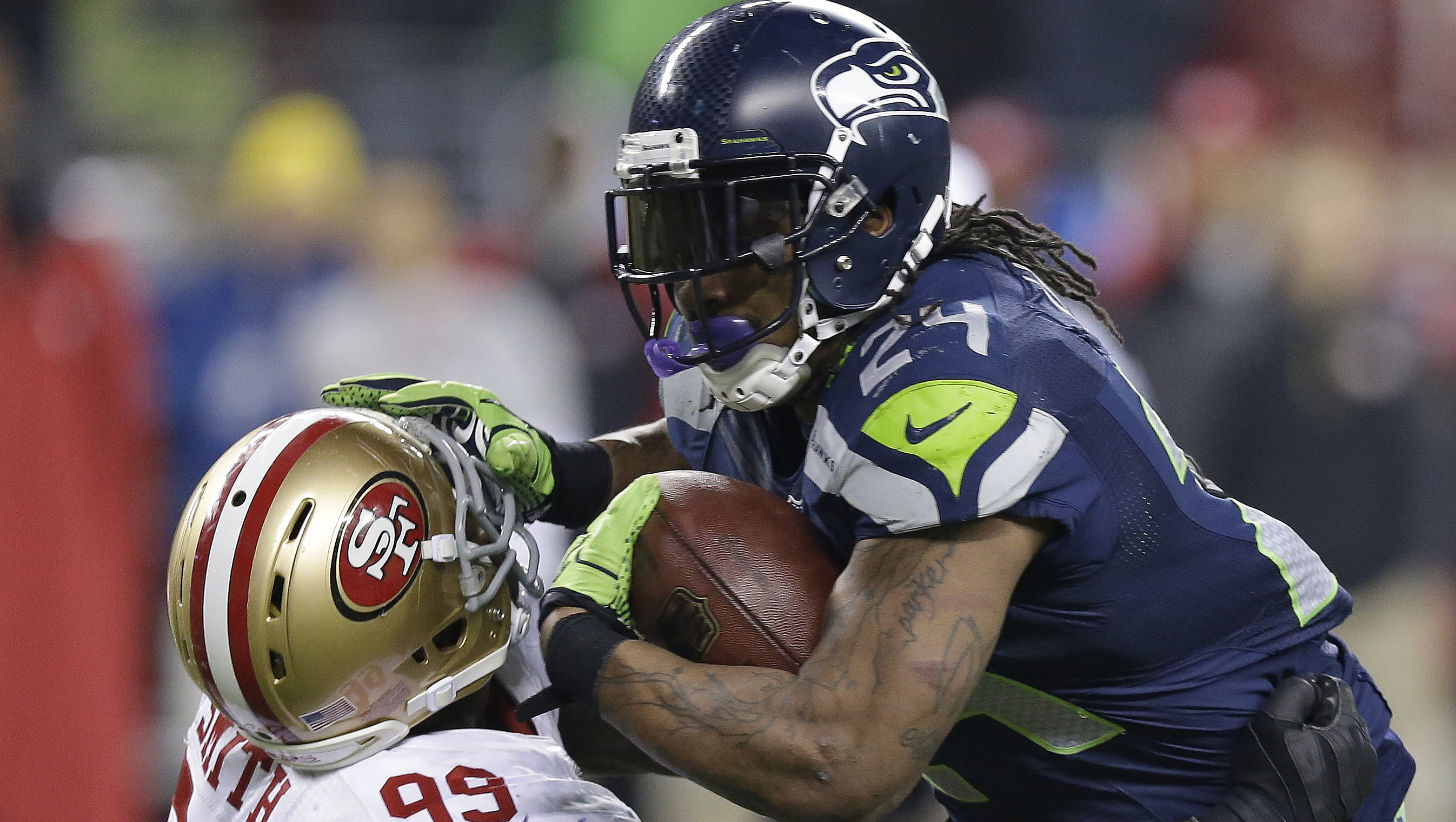 SEATTLE - The Seattle Seahawks are bringing their game-changing defense - and the "12th Man" - to the Big Apple for the Super Bowl.

Seattle's top-ranked defense forced three fourth-quarter turnovers, and Russell Wilson threw a 35-yard touchdown pass on fourth down for the winning points in a 23-17 victory over the San Francisco 49ers for the NFC title Sunday.

Seattle will meet Peyton Manning and the Denver Broncos (15-3) for the NFL title in two weeks in the New Jersey Meadowlands. It's the first trip to the big game for the Seahawks (15-3) since they lost to Pittsburgh after the 2005 season.

The two conference champs had the best records in the league this year, the first time the top seeds have gotten to the Super Bowl since the 2010 game.

"The parity party in the NFL says it's not supposed to work out like this," observes CBSSports.com NFL Writer Will Brinson. "The NFL's top two teams aren't supposed to meet in the Super Bowl, but it's happening."It's going to be great, even if the two teams couldn't be more different.

"Denver got to New York on the arm of Peyton Manning. Not just on Sunday but throughout the season; Manning and the Broncos shattered just about every NFL offensive record during the 2013 season. Having Demaryius Thomas, Eric Decker, Wes Welker and Julius Thomas will help you do that.

"Seattle got (to the Super Bowl) despite their offense as of late. Russell Wilson made some critical mistakes on Sunday and he struggled down the stretch this season. He hasn't put up big numbers and he hasn't been dynamite from the pocket."

Moments after Richard Sherman tipped Colin Kaepernick's pass to teammate Malcolm Smith for the clinching interception, the All-Pro cornerback jumped into the stands behind the end zone, saluting the Seahawks' raucous fans. With 12th Man flags waving everywhere, and "New York, New York" blaring over the loudspeakers, CenturyLink Field rocked like never before.

"That's as sweet as it gets," Sherman said.

"This is really special," added coach Pete Carroll, who has turned around the Seahawks in four seasons in charge. "It would really be a mistake to not remember the connection and the relationship between this football team and the 12th Man and these fans. It's unbelievable."

San Francisco (14-5) led 17-13 when Wilson, given a free play as Aldon Smith jumped offside, hurled the ball to Jermaine Kearse, who made a leaping catch in the end zone.

Steven Hauschka then kicked his third field goal, and Smith intercepted in the end zone on the 49ers' final possession.

"This feels even sweeter, with the amazing support we have had from the 12th Man," team owner Paul Allen said, comparing this Super Bowl trip to the previous one.

Until Seattle's top-ranked defense forced a fumble and had two picks in the final period, the game was marked by big offensive plays in the second half. That was somewhat shocking considering the strength of both teams' defenses.

And those plays came rapidly.

Marshawn Lynch, in full Beast Mode, ran over a teammate and then outsped the 49ers to the corner of the end zone for a 40-yard TD, making it 10-10.

Kaepernick then was responsible for consecutive 22-yard gains, hitting Michael Crabtree, then rushing to the Seattle 28. His fumble on the next play was recovered by center Jonathan Goodwin, who even lumbered for 2 yards.

Anquan Boldin outleapt All-Pro safety Thomas on the next play for a 26-yard touchdown.

Then, Doug Baldwin, who played for 49ers coach Jim Harbaugh at Stanford, stepped up - and through San Francisco's coverage - on a scintillating 69-yard kickoff return that made the stadium shake for the first time all day.

That set up Hauschka's 40-yard field goal. And a frantic finish.

Seattle took its first lead on Wilson's throw to Kearse with 13:44 left, and CenturyLink rocked again.

The place went silent soon after when Niners All-Pro linebacker NaVorro Bowman sustained an ugly left knee injury midway and was carted off. Bowman, who was having a huge game, had forced a fumble at the San Francisco 1, but Lynch recovered.

The Seahawks had gotten their first turnover moments earlier when Cliff Avril stripped Kaepernick and Michael Bennett recovered. But Lynch and Wilson botched a handoff on fourth down on the play after Bowman's injury.

It took only two plays for Kam Chancellor to haul in Kaepernick's underthrow to Boldin, and Hauschka's 47-yarder ended the scoring.

But not the excitement.

Kaepernick, who rushed for 130 yards, got San Francisco to the Seattle 18 with his arm. But his pass for Crabtree was brilliantly tipped by Sherman to Smith.

"We knew it would come down to us in the back end to win this thing," Sherman said.

And now it's on to New Jersey, where Carroll once coached the Jets for a season. That didn't end well - he was fired so the team could hire Rich Kotite. He heads back with a chance to add a Super Bowl crown to two national titles as coach at Southern California.