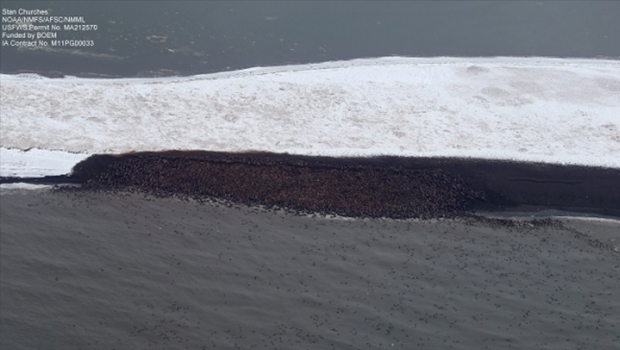 Over the past two weeks, an estimated 10,000 walruses unable to find sea ice over shallow Arctic Ocean waters have come ashore on Alaska's northwest coast.

Scientists with the National Oceanic and Atmospheric Administration on Friday photographed walruses packed onto a beach on a barrier island near Point Lay, an Inupiat Eskimo village 300 miles southwest of Barrow and 700 miles northwest of Anchorage.

The gathering of walruses on shore is a phenomenon that has accompanied the loss of summer sea ice as the climate has warmed.

Pacific walruses spend winters in the Bering Sea. Females give birth on sea ice and use ice as a diving platform to reach snails, clams and worms on the shallow continental shelf.

As temperatures warm in summer, the edge of the sea ice recedes north. Females and their young ride the edge of the sea ice into the Chukchi Sea. However, in recent years, sea ice has receded north beyond continental shelf waters and into the Arctic Ocean, where the water is 10,000 feet deep or more -- too deep for the walruses to dive to the bottom to feed.

Walruses in large numbers were first spotted on the U.S. side of the Chukchi Sea in 2007. They returned in 2009, and in 2011, scientists estimated 30,000 walruses had come ashore along one kilometer of beach near Point Lay.

There was enough remaining ice to keep walruses offshore in 2008 and again last year.

An estimated 2,000 to 4,000 walruses were photographed at the site Sept. 12. The U.S. Fish and Wildlife Service, the agency that manages walruses, immediately took steps to prevent a stampede among the animals packed shoulder to shoulder on the rocky coastline. The agency works with villages to keep people and airplanes a safe distance from herds.

Young animals are especially vulnerable to stampedes triggered by a polar bear, a human hunter or a low-flying airplane. The carcasses of more than 130 mostly young walruses were counted after a stampede in September 2009 at Alaska's Icy Cape.

The goal of the marine mammals survey is to record the abundance of bowhead, gray, minke, fin and beluga whales plus other marine mammals in areas of potential oil and natural gas development, said NOAA Fisheries marine mammal scientist Megan Ferguson in a statement.

"In addition to photographing the walruses haulout area, NOAA scientists documented more bowhead whales, including calves and feeding adults in the Beaufort Sea this summer compared to 2012," said Ferguson. "We are also seeing more gray whale calves in the Chukchi Sea than we have in recent years."