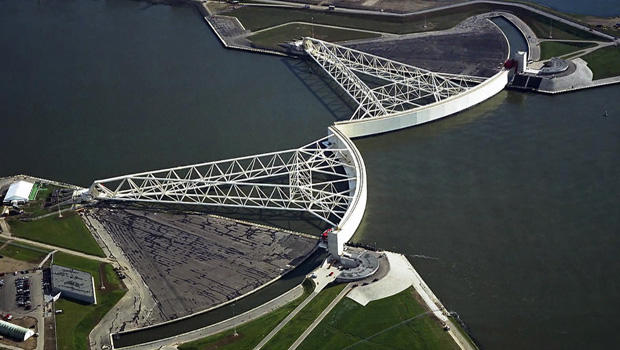 Windmills are more than just a traditional part of the Dutch landscape; they have played a key role in the war the Dutch have been waging against the ocean for the past thousand years. Our Cover Story is reported by Martha Teichner. (This story was previously broadcast on May 21, 2017.):

The windmills at Kinderdijk were built nearly 300 years ago, to pump water out of the surrounding farmland. But the Dutch have been outsmarting the water that's everywhere around them for a thousand years,

It is a matter of survival. Twenty-six percent of the country is below sea level.

A massive storm surge barrier called the Maeslantkering, or Maeslant Barrier, was completed in 1997, to protect Rotterdam, Europe's largest port. It's equal in size to two Eiffel Towers, on their sides.

"This Maeslant Barrier is really here to safeguard us for the future," said Henk Ovink. He is water envoy for the King of the Netherlands -- a water ambassador, if you will.

The Dutch are the world's go-to water management experts. Ovink spent two years in the United States working in areas hit by Superstorm Sandy. "I said [to them], 'Did you think about preventing the disaster?' And they were like, 'Preventing the disaster? No, we couldn't. No, we have to make sure that we respond faster.' And I said, 'But suppose that there is no disaster because you prepared better?'"

Who doesn't know the fable about the little Dutch boy who plugged the hole in a dike with his finger and saved his country?

What really happened taught the Netherlands about preparedness.  A ferocious North Sea storm in January 1953 flooded 500 square miles and killed more than 1,800 people. The Dutch built themselves a fortress of flood protection.

Today, the Netherlands considers itself protected against a 10,000-year storm, in part thanks to research done by Deltares, a gee-whiz kind of place, with the largest wave machine in the world.

At their experimental facility, they can test structures that protect the coast against ocean waves.

Deltares has worked with clients in 140 different countries, including the United States. Ap van Dongeren, a coastal flooding expert with Deltares, says all of their designs are assuming a rise in sea levels. "And that will come with higher waves, so you have to figure that all into your design," he said.

Sea levels in Holland are expected to rise more than three feet by the end of the century. This projection prompted the Dutch government -- so used to walling water out at all costs -- to rethink, and let the water in instead.

"For the Dutch, this is a revolution -- the idea that you're safer by lowering the dikes? This is extraordinary," said journalist Tracy Metz.

In her latest book, "Sweet & Salt," Metz, a longtime Netherlands resident, tells the story of how the farmers of Overdiepse Polder voluntarily agreed to give up their land so that it could become a spillway for a nearby river when it floods, in order to protect cities and towns downstream.

For Nol Hooijmaiers, it was a sacrifice with a silver lining. Huge mounds were constructed, so that he and a few of his neighbors were able to build brand new farms high above the floodplain.

"So you're happy, not angry?" asked Teichner.

"Everybody is happy, ja," he replied.

Learning to accommodate water has led to innovation. For example: The Sand Engine (Zandmotor), a 24-million-ton pile of sand dumped off Holland's south coast. Nature was the engine that spread it into a flood barrier and a beach.

Jim Murley, the man in charge of confronting Miami-Dade County's water issues, and who has consulted Dutch engineers, says parts of the Dutch model are applicable elsewhere. "Just the way they go about thinking about managing water, how they use their land, creates a mindset," he said.

In South Florida, flooding has become a regular occurrence. According to current estimates, sea levels here will rise as much as six feet by the end of the century. At stake: trillions of dollars of real estate and more than seven million lives.

So at a vulnerable Miami waste water treatment plant, critical infrastructure is being rebuilt higher. "We want to be sure that this facility will withstand a storm surge," Murley said.

In Miami Beach, streets are being raised 2.5 feet. A new art museum in downtown Miami is designed so flood water can flush through its foundation.

Murley said, "We're starting to think about how we might develop in the future, if we were having to live with water like the Dutch are."

Like Rotterdam, where there is a floating conference center surrounded by floating trees; and Amsterdam, with its whole neighborhood of floating houses.

Jasper Dykshoorn and his wife, Sietske Jacobs, bought theirs five months ago.

Teicher asked, "It's weird having the water right out the window?"

She doesn't mind that the baby's crib is under water. The house is moored to a dock. So if the water level rises, so does the house.

To Dykshoorn, as a Dutchman, the water is a fact of life -- no more, no less. "It's in our veins, basically," he said.