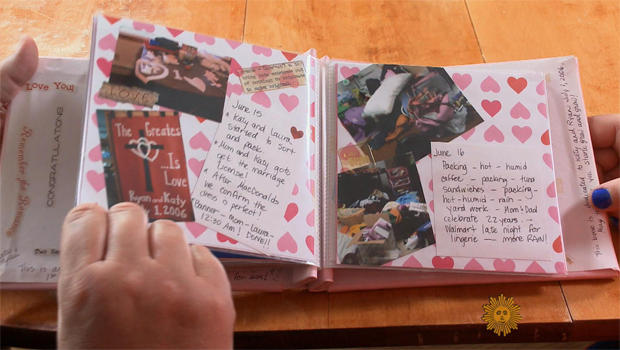 Today, plenty of people still love to cut and paste, Moms in particular. Jennifer Mayerle of our CBS Station WCCO in Minneapolis makes some introductions:

A quick look around this house says it all: family means everything. "We have a saying at our house that we're on the same team together," said Linda Kleppe. She and her husband, Glen, raised their six kids in Pine City, Minnesota, north of Minneapolis.

So she makes scrapbooks, by the dozens -- books full of memories that she hopes her children, like daughter Katie, will appreciate someday.

And from buttons to bows to fancy paper, she gets most of her supplies from the the Pine City Scrapbooking Company. The store, owned by Marni Steltz, doubles as a retreat -- a place where women (moms for the most part) can even stay overnight, and scrapbook.

The inspiration for the shop comes from a place close to Steltz's heart, a gift from her father before he passed away: His World War II scrapbook.

"I'm so glad he wrote around all of them, so you would know who was who," she said of the photos.

It's a personal history -- a snapshot of time gone by.

Garvey says it all started with newspaper clippings, and scrapbooks -- which preserved these news accounts -- are like our modern-day Google: "The press was full of valuable information that was just disappearing. And it was only through making scrapbooks that you would ever be able to find it again."

One of the most notable scrapbookers was Mark Twain, who not only kept scrapbooks but also invented one. Samuel L. Clemens received a patent for a self-pasting scrapbook in the 1870s.

"That meant that instead of having to get out the glue pot and maybe heat the glue, you could use a Mark Twain scrapbook, which had gummed strips on the pages," said Garvey.

As scrapbooking grew in popularity, it came to be a true historical resource.

Alexander Gumby, who was born into poverty in the 1880s, was a cafeteria worker in the lunchroom at Columbia University. He would become one of the most significant scrapbook creators in American history.

Gumby's meticulous scrapbooks -- each page handmade -- depict the lives of notables like poet Langston Hughes and abolitionist Frederick Douglass. His collection of almost 300 scrapbooks, which he donated to Columbia University, documents what it was to be African American in the early 20th century.

"He called this project 'The Unwritten History,'" said Thai Jones, curator of the Manuscript Department at Columbia's Butler Library. "By the 1920s he came to be known as 'Mr. Scrapbook. They would say you didn't know Harlem, you hadn't experienced Harlem, until you had come to his studio and seen his material."

If it weren't for the Gumby scrapbooks, much of this history would be lost forever. "Many of these will be the only remaining document we have, or the only remaining copy of a newspaper article," said Jones. "These are used by scholars all the time."

As are the scrapbooks of some of the women of those times, who defiantly struggled to make their voices heard.

"Women's rights activists, they were acting in public," said Garvey. "They were speaking in public. They were out there on the platform. And they weren't supposed to be. So they had to keep track of how people paid attention to them.

Of course, in these digital days, it's easy to see these scrapbooks as a quaint affectation of a time past. But not to everyone.

"I would like to pass down a legacy of, you know, here's what our family did, here's how we cared about each other, here's how we grew up together," said Linda Kleppe.

As Garvey explained, "We read over the scrapbook maker's shoulders. As we look at their scrapbooks we understand what mattered to them, why they saved it. We guess at why they saved it. And that digging and guessing is such a wonderful and exciting process. It's a gift."