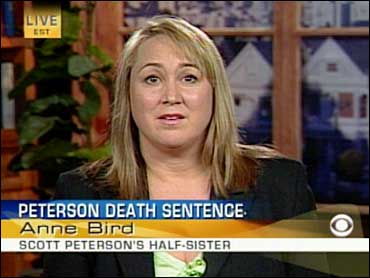 Scott Peterson will be living on death row at San Quentin. Peterson was under heavy guard as he was put in a van. He was sentenced for the murders of his wife Laci and their unborn son.

Wednesday was an emotional day in the courtroom, and yet Scott Peterson was unfased by it all.

"That's the way he's been," his half-sister Anne Bird tells The Early Show co-anchor Julie Chen. "Even during the search for Laci. He was completely emotionless, could have cared less. And that's been really hard to deal with. He's a sociopath, and a sociopath does not have a conscience, which is a really hard fact to understand."

Bird, was convinced of his guilt and gave the reasons why in her book, "Blood Brother: 33 Reasons My Brother Scott Peterson is Guilty." But notes she is against the death penalty not just for her brother, but for everyone.

"I don't see how any good can come of it," she says. "I think this whole thing has just been bad all the way around. I miss Laci very much. She was someone whom I loved and, I never had the opportunity of meeting Conner and that was completely devastating. You know, so this is has been tough."

But judging by the reaction of Laci Peterson's brother Brent Rocha, some good has been done by the sentencing. He admitted to buying a gun and in the courtroom told Scott Peterson, the only reason he chose not to kill Peterson was so he could sweat it out and not take the easy way out.

Reporter Gloria Gomez who has covered the story heard Rocha made the statement. "That was amazing because, obviously, nobody knew that before," she says. "Clearly, he was opening up all of the wounds that he had really held in for so long, and now, spilling all over the courtroom. Some people actually began crying during some parts of what he had to say and, clearly, everyone was moved because Brent was saying: 'Why did you have to take my sister away? Why did you have to do this?' He almost began psycho analyzing Scott saying, 'This is all a product of your environment.'"

Bird says she does not even know whether to contact Scott Peterson or not.

"I haven't quite grasped everything yet," she says. "After everything that's happened; this has been so devastating to so many people. I just want to take a little time."

Having been closed with her sister-in-law, as well, Bird says since she heard the news of the sentencing, she has been very sad for everyone.

She asked if Laci could have realized she was being murdered. "I know she was terrified, and I wasn't there to save her," she said. Then Rocha imagined Laci's unborn baby begging for its life, saying, "Daddy, why are you killing mommy and me? I haven't met you, but I love you. Daddy, please don't do this." Family members sobbed as Rocha poured out her hatred for Peterson.

"There is just so much anger from all sides," Bird notes.