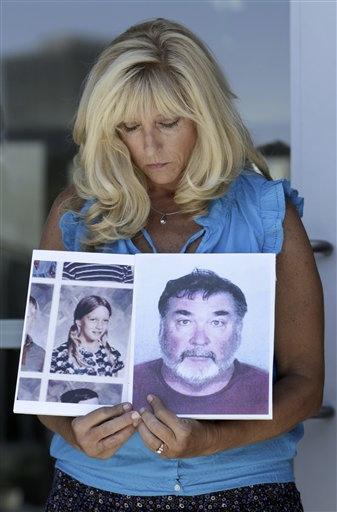 Anne Bird was given up for adoption as an infant, and it wasn't until 32 years later, in 1997, that she was reunited with her birth family.

Little did she know her half-brother, Scott Peterson, was to be at the center of a sensational case that resulted in his conviction in the murders of his wife, Laci, and their unborn son, Conner.

Scott and Bird have the same mother, Jackie Peterson.

Bird has penned, "Blood Brother: 33 Reasons My Brother Scott Peterson Is Guilty," a personal account of her slowly, grudgingly, coming to that conclusion, and her struggle to accept it.

In the book, Bird says she pretty much loved the Petersons from the beginning, and was heartbroken when she found out Laci was missing.

Bird says she couldn't conceive that Scott had anything to do with Laci's disappearance, and was a staunch supporter and defender of Scott almost until the very end. Anne even allowed Scott to stay in her home with her own family.

Over time, says Bird, she noticed again and again things Scott was or wasn't doing and saying, things that just didn't add up and made Bird uncomfortable, until she was finally able to come to terms with the idea that Scott was involved in the murders of Laci and Conner.

Scott was referred to by other family members as "the golden boy," Bird says. "That's how he was described, and how he came across."

Bird says she thought the world of Laci: "She's amazing. She was bubbly, full of life, full of energy, kind , thoughtful, just sweet as could be."

"You thought they had the ideal marriage, but your biological mother…told you on several occasions -- she hinted there were problems," Storm said.

A few weeks before Laci disappeared, says Bird, they went to Disneyland, and Laci "talked a lot about the baby and having the baby, and was so excited, and (Scott) didn't say very much. He said he couldn't wait to play football with the little guy, and that stood out to me as not anything unusual that a man would say. But he just didn't get into how excited he was about the baby."

At Laci's baby shower, Bird continued, Scott "was distant. He didn't talk very much. I asked him if anything was bothering him, and he said, 'No.' "

After Scott became a person of interest in the case, Bird let him stay with her family.

Asked by Storm if he upset about the disappearance, and whether Scott talked about Laci and Conner, Bird responded, "No. In fact, he was a bit celebratory, drinking a lot and almost as if he didn't have a care in the world, which shocked me. But then I thought, maybe he was traumatized or in shock, so I just let go for a bit. I desperately wanted to believe that he could not have possibly done this. So it was really hard for me to look at."

Bird says she also noticed Scott's behavior when they watched televised reports about the search for Laci and Conner: "When they searched the bay for Laci, he would say, 'They're looking in the wrong places. This is the waste of time.' At the time, I just kind of banked it. We had a lot going on in our house and I just banked the information. It seemed unusual."

There was another unusual reaction, Bird says, when she told Scott about the discovery of bodies: "I said, 'They found the body of the woman,' and he said, 'They'll find out it's not Laci and they'll keep looking for her.' And I said, 'Well, they found the body of a baby.' And he said, 'Who would do such a thing?' And yelled it. And that made me think there was a difference between the two."

Bird says that, when it came out that Peterson had had an affair with Amber Frey, Scott told Bird that Frey "meant nothing," and told Bird about another affair he'd had.

Bird's lawyer, Gloria Allred, who appeared with he on The Early Show Monday, reminded Bird that Scott had claimed he had told Laci about Frey and Laci was "fine with" the affair. But, Bird says, she knew it wasn't possible Laci would have accepted that affair.

Bird theorizes that Scott drowned Laci: "It's just my own personal theory, but Scott kept going back to their pool to clean it out, and I couldn't figure out why. After a while, I started thinking maybe he drowned her, though I don't know for sure."

She also concluded Laci and Conner may have been murdered on Dec. 23, because she knew Laci would never have set the table for Christmas the way Scott's table was set, so it must have been Scott who set it. It simply wasn't "a Laci table," Bird told Storm.

What reasons does Bird think Scott could have had for killing Laci and Conner? "I think a little bit of Amber Frey, a little bit of Laci being pregnant, and a lot of this 'golden boy' image that he was trying to project."

Why the need for Bird to write the book? "You know, I never got to say anything. I didn't testify, and it was very important for me to, you know, get this out there. It was very cathartic to be able to release this."

The jury recommended death for Scott Peterson, and sentencing is slated for later this month.

To read an excerpt of "Blood Brother: 33 Reasons My Brother Scott Peterson Is Guilty," click here.