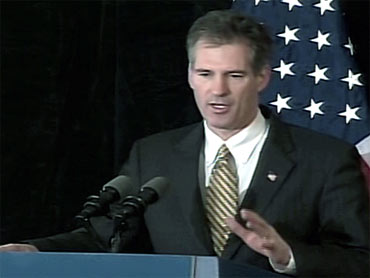 Republican Scott Brown, fresh from a stunning Massachusetts Senate victory that shook the power balance on Capitol Hill, declared Wednesday that his election had sent a "very powerful message" that voters are weary of backroom deals and Washington business-as-usual.

"The president ought to take this as a message to recalibrate how he wants to govern, and if he wants to govern from the middle we'll meet him there," said Senate Republican leader Mitch McConnell of Kentucky.

Democrats still exercise majority control over both the House and Senate. But Tuesday's GOP upset to win the seat long held by the late Sen. Edward Kennedy - following Republican victories in Virginia and New Jersey last fall for gubernatorial seats that had been held by Democrats - signals challenges for Democratic prospects in midterm elections this year. Even when the economy is not bad, the party holding the White House historically loses seats in midterms.

Brown, in his first meeting with reporters after the special election, portrayed his victory as less a referendum on Obama or the president's health care proposal and more of a sign that people are tired of Washington politics and dealmaking.

He said his victory sends "a very powerful message that business-as-usual is just not going to be the way we do it."

"I think it's important that we hit the ground running," Brown said. He said he would pay a courtesy call to the nation's capital on Thursday.

Brown's victory gives Republicans 41 votes in the Senate, upending the Democrats' ability to stop filibusters and other delaying tactics. Counting the two Senate independents who usually vote with Democrats on procedural issues, the party will be able to muster only 59 votes, at most, one short of the number needed.

Brown said that, while he planned to caucus with Republicans, "I'm not beholden to anybody."