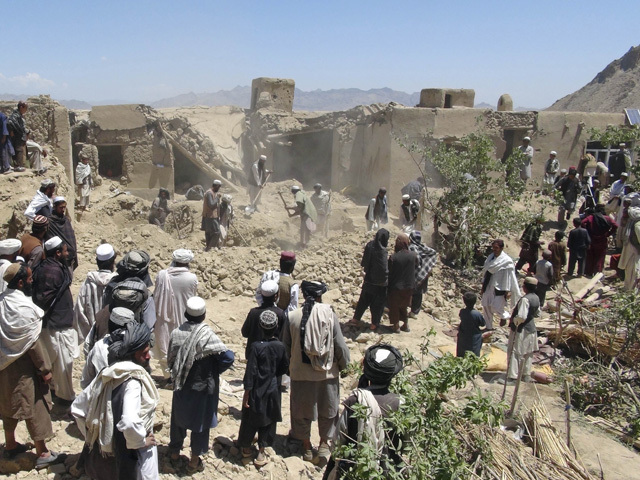 (AP) KANDAHAR, Afghanistan - Scores of Afghans were killed Wednesday in Taliban attacks and other violence including a NATO airstrike, highlighting persistent instability as foreign troops begin their drawdown more than a decade after the U.S.-led invasion.

The bloodbath spanned from the insurgents' stronghold in the south to the relatively peaceful north to the volatile eastern border with Pakistan. Two U.S. pilots also were killed when their helicopter crashed in Ghazni province in the east, a senior U.S. defense official said.

The deadliest assault took place in the southern city of Kandahar, the birthplace of the Taliban, where three suicide bombers turned a dusty marketplace into a gruesome scene of body parts, clothing, glass and other debris.

"I couldn't see anything except for fire and dust," said Islam Zada, who was on the other side of the road having tea near his parked truck when the first bomb went off.

"I found a wounded truck driver on our side of the road and went to help him," Zada said. "We gave him some water and when we were talking to him the other blasts happened."

The Taliban appeared to be targeting companies located at the Kandahar bomb site that provide supplies to a massive military base used by the U.S.-led coalition about three miles (five kilometers) away. Eight of the 22 killed worked for companies that supply equipment to the base. At least 50 others were wounded.

In the past two years, tens of thousands of U.S.-led coalition troops have flooded Taliban strongholds in the south, and have largely succeeded in boosting security there. But the Taliban have proven resilient, continuing to conduct suicide attacks to create fear among the public, opening up new fronts in the north and west and stepping up attacks in the east.

Afghan President Hamid Karzai condemned the attack in Kandahar, saying it proved the "enemy is getting weaker because they are killing innocent people."

The NATO coalition also denounced the killings and urged the Afghan people to support the government and the nation's developing security forces.

"The Taliban continue to kill innocent civilians," the coalition said in a statement. "These attacks are clear evidence of the insurgent's total lack of regard for the people and the legitimate government of Afghanistan and must stop."

The Taliban's reclusive leader, Mullah Mohammad Omar, said in a Muslim holiday message late last year that his fighters must protect Afghan civilians so the insurgency can maintain good relations with the population. But they continue.

Last year was the deadliest on record for civilians in the Afghan war, with 3,021 killed as insurgents ratcheted up violence with suicide attacks and roadside bombs, according to the United Nations.

The number of Afghan civilians killed dropped 36 percent in the first four months of this year compared with last year -- a promising trend though the U.N. emphasizes that too many civilians are being caught up in violence as insurgents fight Afghan and foreign forces.

Anti-government forces, including the Taliban and other militants, were responsible for 79 percent of civilian casualties in the first four months of this year, according to the U.N. Afghan and foreign forces were responsible for 9 percent. It was unclear who was to blame for the remaining 12 percent.

NATO said it did not have any reports that civilians were killed, but was aware of the allegations and had begun to formally assess what happened during the operation conducted by both Afghan and coalition forces.

NATO spokesman Maj. Martyn Crighton said troops were trying to capture a Taliban commander and called in an airstrike when they came under fire.

"During the follow-on assessment, the Afghan and coalition security force discovered two women with non-life-threatening injuries," Crighton said in an email. He said both women were taken to a military base for treatment.

Nighttime raids on militants taking cover in villages have been a repeated source of tension between the Afghan government, which says they put civilians in the crossfire, and its international allies, who say such operations are important in capturing and killing insurgent leaders.

Frequently, as in the incident in Baraki Barak, there are conflicting accounts of what happened.

An Associated Press photographer saw the bodies of five women, seven children and six men piled in the back of vans that villagers drove to the capital of Logar province to protest the airstrike. Raeis Khan Abdul Rahimzai, deputy provincial police chief, estimated that there were 18 bodies in the vans. He said seven key local Taliban officials were among those killed, along with women and children.

The head of the local council of Sajawand village, Mohammad Wali, said that several families were attending a wedding party when the bomb struck the house about 1 a.m.

"The house is completely destroyed. Everyone is shoveling to try to get the bodies out. Some of the bodies have no legs, no hands," Wali said.

But the provincial police chief, Gen. Ghulam Sakhi Roogh Lawanay, said there was no wedding party. He said the gathering was a meeting of Taliban commanders.

"It was the senior commanders of Baraki Barak and Logar," he said. "The special forces came with the Afghan forces and killed them."

"The reason they did it is not known, but it clearly was the Taliban and they were just trying to disrupt security and create fear among people," said Sher Jan Durani, spokesman for provincial police chief.

Elsewhere in the same province, an Afghan policeman died while trying to defuse a roadside bomb, Durani said. The policeman was killed shortly after four civilians, including a tribal leader, were wounded by another roadside bomb as they were leaving a community meeting.

Also in the north, a militant blew himself up after being stopped by police in Faryab province. The attack killed one civilian and wounded eight others including five women, police said.

In eastern Afghanistan, a child was killed and five other children -- four from the same family -- were wounded when they stumbled on a mine on their way home Tuesday in Yayha Khel district of Paktika province, the governor's office said.

But the government's attention was focused on the attack in Kandahar.

Taliban spokesman Qari Yousef Ahmadi claimed responsibility for the bombings at the market, where small shops and private security company offices line one side of the road and large trucks that carry supplies to Kandahar Air Field are regularly parked along the other side.

The first suicide bomber detonated a three-wheeled motorbike filled with explosives, said Rahmatullah Atrafi, deputy police chief in Kandahar province. Then, as people rushed to assist the victims, two others walked up to the site and blew themselves up, he said, adding that eight private security guards were among those killed.

Mohammad Naeem, a 30-year-old shopkeeper, said he was selling soft drinks to a customer when he heard the first blast. "I dropped to the ground," he said. "When I got up, I looked outside and I heard people shouting for help."