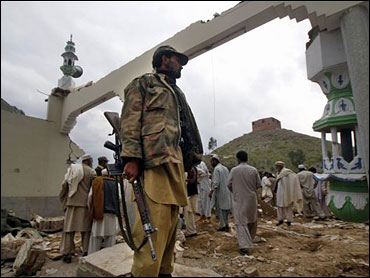 This story was filed by CBS News' Farhan Bokhari in Islamabad.

A suicide bomber blew himself up Friday in a mosque packed with more than 250 worshippers in northwest Pakistan, killing at least 70 people, a senior government official said.

"I fear this death toll may go higher. So far, there is evidence to suggest that we are looking at 70 casualties if not more," said the official, who spoke to CBS News on condition of anonymity from Peshawar, the densely populated city where the bomber struck.

Pakistani TV channels reported the death of at least 50 people, though they also warned that the toll was almost certain to go higher.

Peshawar is the capital of Pakistan's violence-stricken Northwest Frontier Province (NWFP). The attack badly damaged the main mosque in Jamrud, a Peshawar suburb located near the Afghan border.

The area has been plagued by an insurgency led by al Qaeda and Taliban militants who have continuously fought Pakistan's military for the past few years. Television news video showed police officers, rescue workers and residents digging through the rubble of the mosque in search of survivors.

There was no immediate claim of responsibility for Friday's attack, but Pakistani investigators were looking for any possible links to the Taliban - at least 15 of those killed in the blast were Pakistani government employees.

On Monday, the main police intelligence headquarters in Islamabad was hit in a suicide attack in which only the bomber and one guard at the front gate were killed.

Pakistani intelligence officials then revealed they had picked up information which suggested the bomber may have been one of as many as ten dispatched some weeks ago by the Taliban in the group's latest move to destabilize the country.

(CBS)
On Friday, a Pakistani intelligence official told CBS News on condition of anonymity that he believed the attacker in Peshawar, "was one of the bombers already in the field to carry out attacks which would destabilize Pakistan."

Western diplomats said the attack has wider repercussions for Pakistan - and its neighbors - beyond highlighting again the growing lawlessness within the country.

Diplomats from NATO countries, including the U.S., have become increasingly concerned about the security of supply convoys which travel through some of Pakistan's most dangerous reasons to deliver goods to troops in Afghanistan.

Several convoys have been attacked in recent months in the NWFP, including ambushes close to the scene of Friday's attack.

"If internal security is deteriorating this rapidly, then maybe this is a far more worrying situation than what is appreciated," said one Western diplomat.