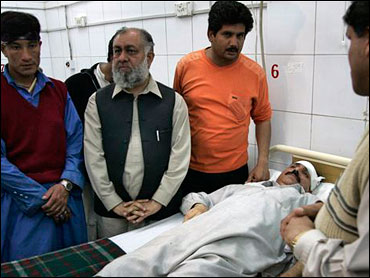 A suicide bomber blew himself up at the main gate of a police station in the Pakistani capital late Monday, killing himself and one officer.

The blast on a holiday marking Pakistan's national day underscored the threat posed by Islamist militants blamed for near-daily attacks in the Western allied but increasingly unstable country.

It was the first bombing in the capital Islamabad since last September, when more than 50 people were killed in a suicide truck bomb attack on the Marriott Hotel.

The bomber detonated explosives at the gate of the police station close to a market in the center of the capital, Interior Ministry secretary Kamal Shah said. He said an officer who was apparently challenging the attacker died in the blast.

The police station houses the offices of the Special Branch, which is responsible for intelligence gathering about terrorism, sectarianism and political activities in the country.

"We were on high alert, but there is no way to detect a person who is determined to blow himself up," Interior Ministry chief Rehman Malik said.

There were no immediate reports of any other casualties.

After the attack, Pakistan's intelligence services Monday night were alerted to the possibility of a bombing campaign targeting the country's intelligence outfits, reports CBS News reporter Farhan Bokhari in Islamabad.

"For some time now, we have looked at reports of militant outfits preparing to target our intelligence services. Now with this attack, we have reason to send out an alert to all the main intelligence offices to double their security" a senior Pakistani security official told CBS News speaking on condition of anonymity.

The official said, Baitullah Mehsud, a hardcore Islamic militant linked to al Qaeda and the Taliban was the prime suspect, though investigators were looking at other possible connections. "On the basis of what we were hearing for the past few weeks, we believed Baitullah Mehsud was looking to target a high profile location. That's why he is among the key suspects" said the Pakistani official.

Pakistan is under intense Western pressure to crack down on the militants, many of which are believed linked to al Qaeda. They are also blamed for attacks on U.S. troops in neighboring Pakistan. The terrorists are believed to have established safe havens in tribal regions close to the Afghan border.