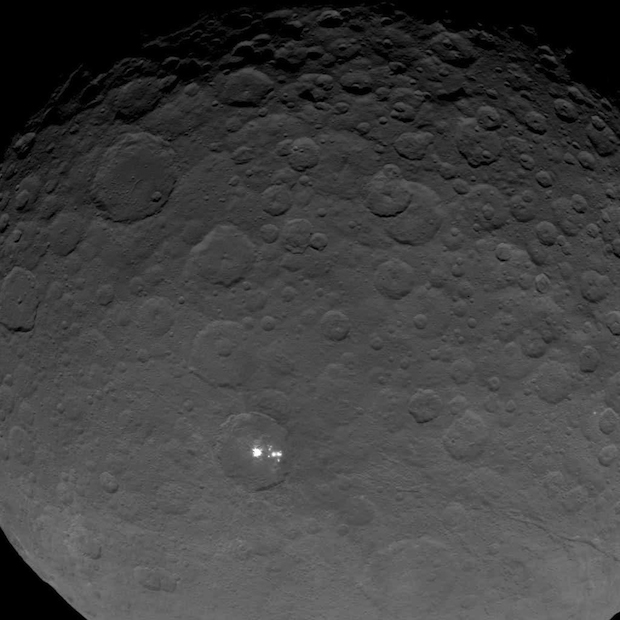 Scientists have gotten their closest look yet at several perplexing bright spots on the dwarf planet Ceres.

A series of images captured May 16 by NASA's Dawn mission showcased the collection of many smaller spots, which for months have mystified scientists. The images were taken from a distance of 4,500 miles (7,200 kilometers) and have a resolution of 2,250 feet (700 meters) per pixel.

"Dawn scientists can now conclude that the intense brightness of these spots is due to the reflection of sunlight by highly reflective material on the surface, possibly ice," Christopher Russell, principal investigator for the Dawn mission from the University of California, Los Angeles, said.

When the spots were first seen in March, scientists suggested they were reflections off exposed ice or some other material. More details were gleaned from a second set of images of the spots taken by Dawn on April 14 and 15 from a vantage point 14,000 miles (22,000 kilometers) above Ceres' northern hemisphere. In an update May 11, a fresh set of images revealed that what scientists thought were two spots turned out to be many smaller spots.

Dawn arrived at Ceres March 6, marking the first time a spacecraft has orbited a dwarf planet.

Scientists will be comparing data from Ceres to the giant asteroid Vesta, which Dawn studied from 2011 to 2012. This should offer them insights about the formation of our solar system, since Ceres and Vesta -- located in the main asteroid belt between Mars and Jupiter -- were on their way to becoming planets before their development was interrupted.