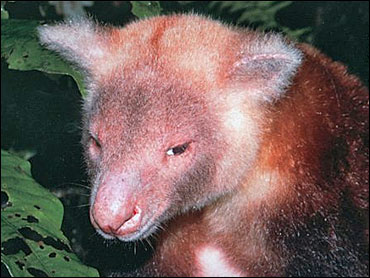 Scientists discovered a "Lost World" in an isolated Indonesian jungle, identifying dozens of new species of frogs, butterflies and plants, as well as large mammals hunted to near extinction elsewhere, members of the expedition said Tuesday.

The team also found wildlife that were remarkably unafraid of humans during its rapid survey of the Foja Mountains, an area in eastern Indonesia with more than two million acres of old growth tropical forest, said Bruce Beehler, a co-leader of the month long trip.

Two Long-Beaked Echidnas, a primitive egg-laying mammal, simply allowed scientists to pick them up and bring them back to their camp to be studied, he said.

The December 2005 expedition to Papua province on the western side of New Guinea island was organized by the U.S.-based environmental organization Conservation International and the Indonesian Institute of Sciences.

The World Wild Fund for Nature, which had no ties to the project, said finding previously unknown species in the sprawling nation, renowned for its rich biodiversity, was not unusual.

"There are many species that have not been identified" in Indonesia, said Chairul Saleh, a species officer for the global environmental conservation group.

Papua, the scene of a decades-long separatist rebellion that has left an estimated 100,000 people dead, is one of the country's most remote provinces, geographically and politically, and access by foreigners is tightly restricted.

The 11-member team of U.S., Indonesian and Australian scientists needed six permits before they could legally fly by helicopter to an open, boggy lakebed surrounded by forests near the range's western summit.

"There was not a single trail, no sign of civilization, no sign of even local communities ever having been there," said Beehler, adding that two headmen from the Kwerba and Papasena tribes, the customary landowners of the Foja Mountains, accompanied the expedition.

"They were as astounded as we were at how isolated it was," he told The Associated Press in a telephone interview from Washington D.C. "As far as they knew, neither of their clans had ever been to the area."

The scientists said they discovered 20 frog species, including a tiny microhylid frog less than a half inch long, four new butterfly species, and at least five new types of palms.

Their findings, however, will have to be published and then reviewed by peers before being officially classified as new species, a process that could take six months to several years.

Because of the rich diversity in the forest, the group rarely had to stray more than a few miles from their base camp.

"We've only scratched the surface," said Beehler, vice president of Conservation International's Melanesia Center for Biodiversity Conservation, who hopes to return later this year with other scientists.

One of the most remarkable discoveries was the Golden-mantled Tree Kangaroo, an arboreal jungle-dweller new for Indonesia and previously thought to have been hunted to near extinction, and a new honeyeater bird, which has a bright orange face-patch with a pendant wattle under each eye, Beehler said.

The scientists also took the first known photographs of Berlepsch's Six-Wired Bird of Paradise, described by hunters in New Guinea in the 19th century.

The scientists said they watched in amazement as, just one day after arriving, a male bird performed a courtship dance for an attending female in their camp, shaking the long feathers on its head.

One of the reasons for the rain forest's isolation, Beehler said, was that only a few hundred people live in the region and game in the mountain's foothills is so abundant that they had no reason to venture into the jungle's interior.

There did not appear to be any immediate conservation threat to the area, which has the status of a wildlife sanctuary, he said.

"No logging permits are given to this area, there is no transport system, not a single road," Beehler said.

"But clearly with time everything is a threat. In the next few decades there will be strong demands, especially if you think of the timber needs of nearby countries like China and Japan. They will be very hungry for logs."