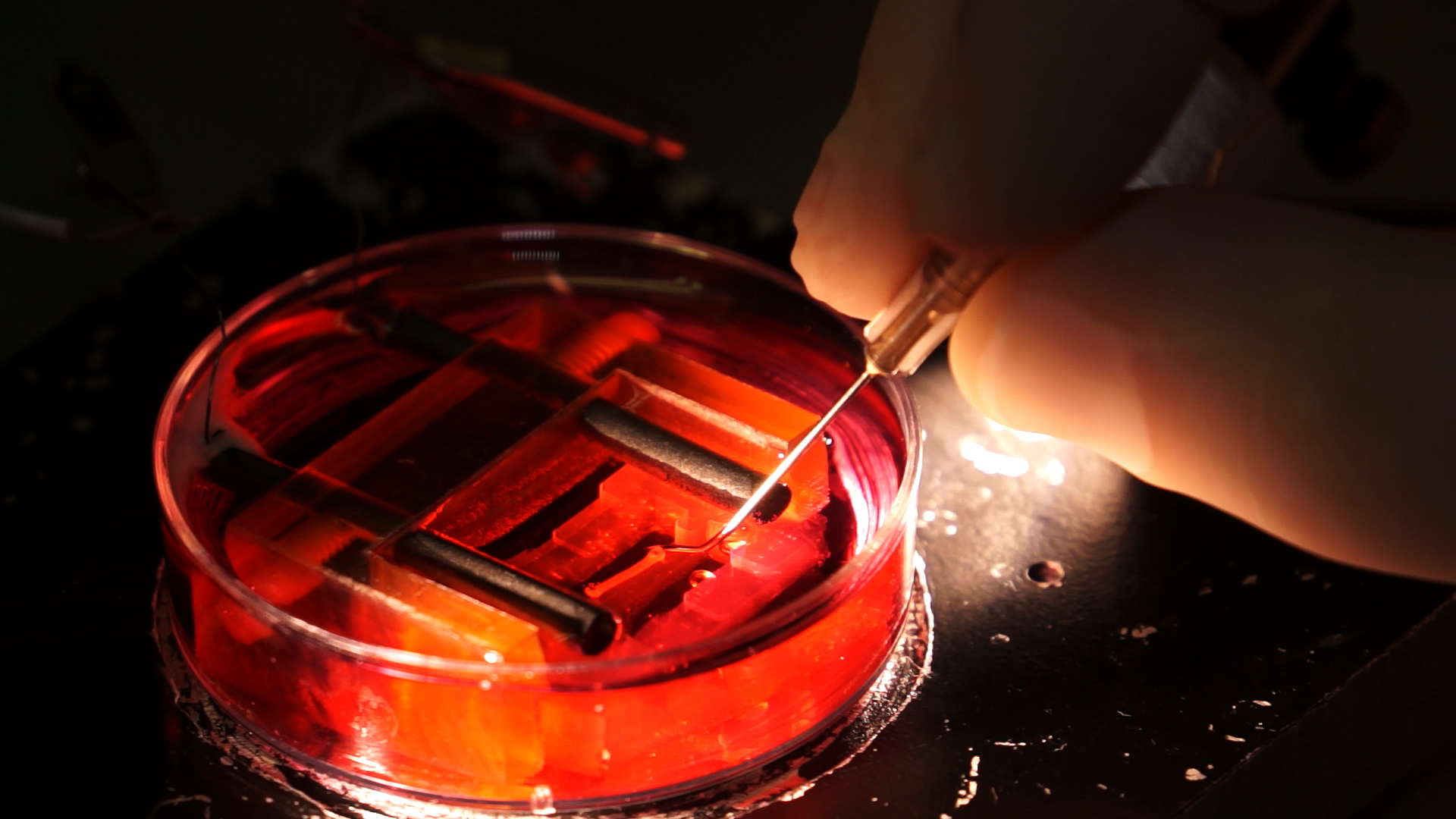 The tiny tissues are actual beating heart muscles created from stem cells. Their creators hope they could revolutionize medical research or even one day be implanted in patients.

While the potential for such a medical innovation is vast, Costa says his team's primary goal at this time is to use the tissue to make medical research more efficient.

Testing a new treatment or experimental drug is a lengthy, expensive process, as researchers and companies must follow strict protocols for multi-phase testing to ensure safety and efficacy. Many of these long processes ultimately end in failures.

"The most expensive failures are ones that occur when you're testing them either in large animals or in patients in early clinical trials," Costa explained. "So what we're trying to do in my lab is develop new approaches that can help to make that process more efficient and identify processes before they fail."

That's where the tissue comes in.

Companies often test thousands of compounds for potential treatments before whittling the number down and starting animal trials on the most promising ones. By using this tissue in the lab, scientists could know earlier whether a treatment has promise, reducing the number of animal experiments and potentially increasing the chance of identifying drugs that will work in patients.

The tissues are created from pluripotent stem cells -- cells that have the potential to develop into a wide variety of human tissues -- that undergo a reprogramming process to be turned into cardiac muscle cells.

The process doesn't stop there; otherwise the product would be just a glob of tissue in a dish. Next the cells are mixed with a collagen matrix material, like what people have in their skin and organs, and over 7 to 10 days scientists guide its self-assembly to create a tissue that has the structure of organization of heart muscle, Costa explained.

"There's multiple stages in this process. I liken it a little bit to making Jell-O at home," he said. "It's not sufficient to just look like heart muscle, we actually need it to behave like heart muscle."

For now, much of the research looks at known heart drugs or adrenaline to make sure the tissues are reacting accurately.

A study published in January, led by Dr. Irene Turnbull, a postdoctoral researcher at the lab, showed the tissues contracted 70 beats per minute, similar to the human heart, and mimicked responses to adult and newborn hearts while electrically stimulated in tests.

"This advance, if it proves successful over time, will beat anything that's currently available," Dr. Gerald Weissmann, editor-in-chief of The FASEB Journal where the study was published, said at the time.

Heart disease is the main focus of the team's future research and they are working with other departments to test new therapies. Among them are scientists developing therapies to improve heart muscle after a heart attack. Others are examining the underlying causes of tachycardia (a faster-than-normal heart rate that is sometimes to blame when seemingly healthy people have sudden cardiac arrest while playing sports) by putting tissues under stressed conditions to see what makes them more susceptible to this often deadly condition.

But Costa pointed out the tissue could also be valuable for examining how unrelated drugs affect the heart, such as chemotherapy treatments for cancer that can be toxic to the muscle.

One of the ultimate long-term goals in the cardiac engineering field is to develop a surgical replacement for the heart, be it just a patch to fix injured muscle or treat congenital heart conditions, or even a whole new heart for those who need a transplant.

"There's a lot of problems that still need to be addressed before you can effectively put one of these tissues into a patient's heart," Costa said. "I think this kind of research, and lots of other research, really has important potential to redefine how we treat disease in the future."