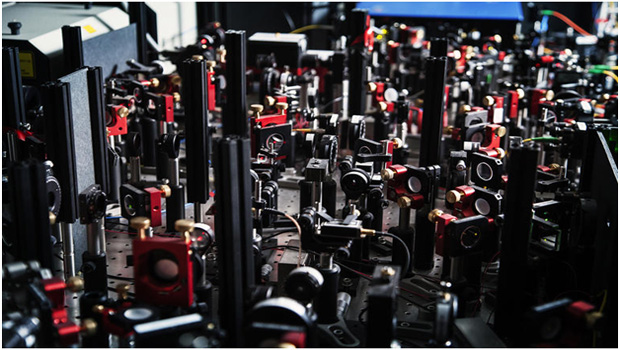 Albert Einstein once told a friend that quantum mechanics doesn't hold water in his scientific world view because "physics should represent a reality in time and space, free from spooky actions at a distance." That spooky action at a distance is entanglement, a quantum phenomenon in which two particles, separated by any amount of distance, can instantaneously affect one another as if part of a unified system.

Now, scientists have successfully hijacked that quantum weirdness -- doing so reliably for the first time -- to produce what many sci-fi fans have long dreamt up: teleportation. No, not beaming humans aboard the USS Enterprise, but the teleportation of data.

Physicists at the Kavli Institute of Nanoscience, part of the Delft University of Technology in the Netherlands, report that they sent quantum data concerning the spin state of an electron to another electron about 10 feet away. Quantum teleportation has been recorded in the past, but the results in this study have an unprecedented replication rate of 100 percent at the current distance, the team said.

Thanks to the strange properties of entanglement, this allows for that data -- only quantum data, not classical information like messages or even simple bits -- to be teleported seemingly faster than the speed of light. The news was reported first by The New York Times on Thursday, following the publication of a paper in the journal Science.

Proving Einstein wrong about the purview and completeness of quantum mechanics is not just an academic boasting contest. Proving the existence of entanglement and teleportation -- and getting experiments to work efficiently, in larger systems and at greater distances -- holds the key to translating quantum mechanics to practical applications, like quantum computing. For instance, quantum computers could utilize that speed to unlock a whole new generation of unprecedented computing power.

Quantum teleportation is not teleportation in the sense one might think. It involves achieving a certain set of parameters that then allow properties of one quantum system to get tangled up with another so that observations are reflected simultaneously, thereby "teleporting" the information from one place to another.

To do this, researchers at Delft first had to create qubits out of classical bits, in this case electrons trapped in diamonds at extremely low temperatures that allow their quantum properties, like spin, to be observed.

A qubit is a unit of quantum data that can hold multiple values simultaneously thanks to an equally integral quantum phenomenon called superposition, a term fans of the field will accurately associate with the Schrödinger equation, as well as Heisenberg's uncertainty principle that says something exists in all possible states until it is observed. It's the same way quantum computing may one day surpass the speeds of classical computing by allowing calculations to spread bit values between 0, 1 or any probabilistic value between the two numbers -- in other words, a superposition of both figures.

With quibits separated by a distance of three meters, the researchers were able to observe and record the spin of one electron and see that reflected in the other qubit instantly. It's an admittedly wonky conception of data teleportation that requires a little head scratching before it begins to clear up.

Still, its effects could be far reaching. The researchers are attempting to increase that distance to more than a kilometer, which would be ample leeway to test whether or not entanglement was a consistent phenomenon and that the information was traveling faster than the speed of light. Such experiments would more definitively knock down Einstein's disqualification of entanglement due to its violation of classical mechanics.

"There is a big race going on between five or six groups to prove Einstein wrong," Ronald Hanson, a physicist leading the research at Delft, told The New York Times. "There is one very big fish."