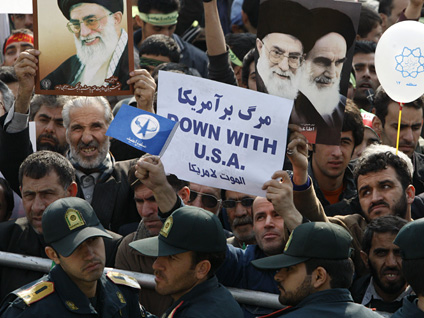 With only a few days left, the U.N.-led hunt for candidates to fill the 30 posts in a new interim Iraqi government heated up Wednesday. But a nuclear scientist who had been jailed by Saddam Hussein took himself out of the competition for the top job of prime minister.

Hussain al-Shahristani had been mentioned in recent days as a candidate for the post of prime minister, the most important job in the transition government to take office June 30.

Special U.N. envoy Lakhdar Brahimi said in a statement released by his spokesman at the United Nations that there was no doubt "Mr. Shahristani could serve his country well in a number of positions in government."

"Mr. Shahrestani, however, has himself clarified that he would prefer to serve his country in other ways," the statement said.

Also at the U.N. Wednesday, four key nations proposed major changes to the U.S.-British draft resolution that would give the new Iraqi government the right to decide whether the multinational force remains in the country and limiting the force's mandate until January 2005.

A three-page proposal by China — which diplomats said was supported by Russia, France and Germany — would give the interim government that takes over on June 30 greater authority than the resolution introduced to the U.N. Security Council by Britain and the United States on Monday.

The proposal, obtained by The Associated Press, was submitted to council members Wednesday afternoon during a closed-door discussion of the U.S.-British draft.

The proposal would also determine "that the interim government of Iraq shall exercise full sovereignty, in the political, economic, security, judicial and diplomatic areas, including the power to control and dispose all the natural and economic resources, sign economic cooperation agreements and contracts, and enjoy judicial independence and the power to administer prisons in Iraq."

The U.S.-British draft endorses the formation of a sovereign interim Iraqi government that will "assume the responsibility and authority" for governing the country by June 30, but doesn't spell out its powers.

It also makes no mention of the control of prisons, a highly sensitive issue following revelations of physical and sexual abuse of Iraqi detainees by U.S. soldiers at Abu Ghraib prison in Iraq which have sparked an international outcry.

The U.S.-British draft reaffirms authorization for the multinational force currently in Iraq to continue to maintain security and stability, under a unified command. It would review the force's mandate in 12 months or at the request of the transitional government which will be elected by early next year.

The Chinese proposal would authorize the formation and deployment of a multinational force to assume "primary responsibility for security during the transitional period." Its mandate would expire in January 2005 when elections are scheduled to be held, and any extension "should respect the views of the new Iraqi government to be elected and decided by the Security Council."