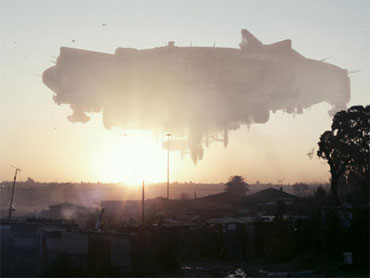 For the past 50 years, scientists have scoured the skies for radio signals from beyond our planet, hoping for some sign of extraterrestrial life. But one physicist says there's no reason alien life couldn't already be lurking among us — or maybe even in us.

Paul Davies, an award-winning Arizona State University physicist known for his popular science writing said Tuesday that life may have developed on Earth not once but several times.

Davies said the variant life forms — most likely tiny microbes — could still be hanging around "right under our noses — or even in our noses."

"How do we know all life on Earth descended from a single origin?" he told a conference at London's prestigious Royal Society, which serves as Britain's academy of sciences. "We've just scratched the surface of the microbial world."

The idea that alien micro-organisms could be hiding out here on Earth has been discussed for a while, according to Jill Tarter, the director of the U.S. SETI project, which listens for signals from civilizations based around distant stars.

She said several of the scientists involved in the project were interested in pursuing the notion, which Davies earlier laid out in a 2007 article published in Scientific American in which he asked: "Are aliens among us?"

How to protect your Android phone from hackers

So far, there's no answer. And ever finding one would be fraught with difficulties, as Davies himself acknowledged.

Unusual organisms abound — including chemical-eating bacteria which hide out deep in the ocean and organisms that thrive in boiling-hot springs — but that doesn't mean they're different life forms entirely.

"How weird do they have to be suggest a second genesis as opposed to just an obscure branch of the family tree?" he said. Davies suggested that the only way to prove an organism wasn't "life as we know it" was if it were built using exotic elements which no other form of life had.

Such organisms have yet to be found. Davies also noted that less than 1 percent of all the world's bacteria had been comprehensively studied — leaving plenty of time to find unusual organisms.

"You cannot tell just by looking that a microbe has some radically different inner chemistry," he said.

Davies' call for alien-hunting scientists to look to their own backyards came as one of the pioneers of the search for extraterrestrial intelligence told the conference the job of finding proof of alien life in outer space may be more difficult than previously thought.

Frank Drake, who conducted the first organized search for alien radio signals in 1960, said that the Earth — which used to pump out a loud mess of radio waves, television signals and other radiation — has been steadily getting quieter as its communications technology improves.

Drake cited the switch from analogue to digital television — which uses a far weaker signal — and the fact that much more communications traffic is now relayed by satellites and fiber optic cables, limiting its leakage into outer space.

"Very soon we will become very undetectable," he said. If similar processes were taking place in other technologically advanced societies, then the search for them "will be much more difficult than we imagined."

But Drake said scientists at SETI were excited by the possibility of using lasers to send super-bright flashes of light into space for a tiny fraction of a second. The flashes could theoretically be seen up by an advanced civilization up to 1,000 light years away, and Tarter said infrared versions of the devices could possibly send beams even further.

But Drake noted that the interstellar equivalent to turning a flashlight on and off only works if a prospective alien civilization wants to get in touch to begin with.

"For this to work ... There has to be altruism in the universe," he said.