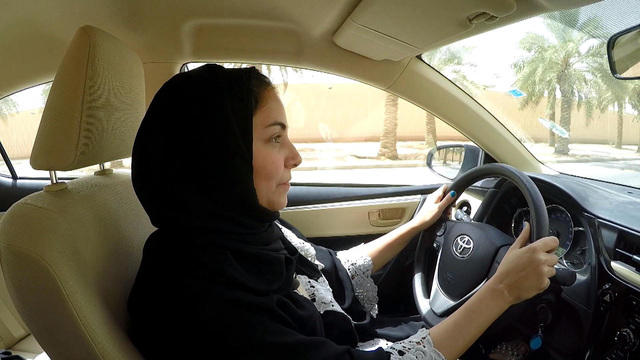 RIYADH, Saudi Arabia -- Women in Saudi Arabia have had to wait – and protest – for nearly 30 years to win the right to drive. Earlier this month their government lifted the world's last ban on female drivers. Many give Saudi Crown Prince Mohammed bin Salman credit for the change.

But now, just as they're set to get behind the wheel, the Saudi government has begun arresting women who dare to campaign for their rights, reports CBS News correspondent Holly Williams.

On Sunday, for the first time Salma Youssef will finally be able to legally drive herself to work and chauffeur her three children to school.

"Yeah, it's freedom," she responded.

She passed her test last week, and chauffeured Williams around the campus of a women's university, where they've built a female-only driving school.

In the conservative Islamic country, where women still need a male relative's permission to travel overseas or get married, brave Saudi women fought for the right to drive, illegally taking the wheel and shaming their government.

Saudi comedians satirized the sexist attitudes behind the driving ban and poked fun at religious conservatives who said driving could damage a woman's ovaries.

But now as the Saudi government finally allows women to hit the roads, it's also begun arresting women's rights campaigners who've demanded total equality, reportedly including Madeha al-Ajroush, whom Williams interviewed in 2014. "The car for the Saudi woman have become the symbol of wanting our voices to be heard, and our needs to be heard," al-Ajroush said then.

We understand al-Ajroush has been released, but other women remain behind bars.