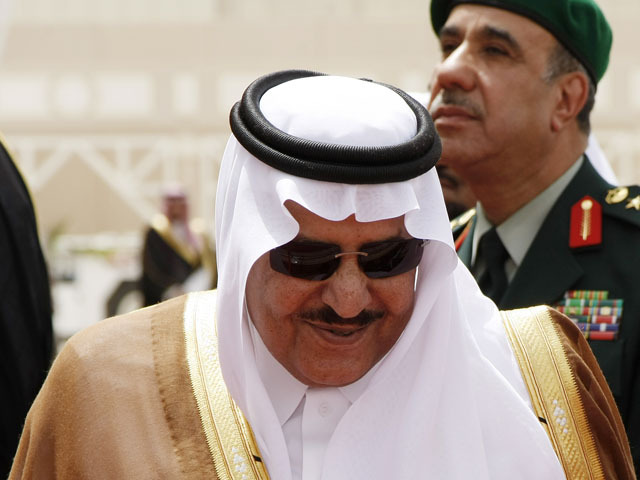 RIYADH, Saudi Arabia - Saudi Arabia named a new crown prince late Thursday: the tough-talking interior minister who is known for cracking down on Islamic militants and resisting moves toward greater openness in the ultraconservative kingdom.

Nayef would assume the throne upon the death of King Abdullah, 87, who is recovering from his third operation to treat back problems in less than a year.

Video on Saudi TV showed the king sitting in an armchair, wearing a white headscarf and robe, with another cream-colored robe draped over his shoulders. He did not speak.

Images broadcast earlier this week from the funeral of Prince Sultan showed the king with a surgical mask covering his face.

Prince Sultan died in New York Saturday at the age of 80 after an unspecified illness.

Traditionally, the king chooses his heir. But Prince Nayef was chosen by Allegiance Council, a 37-member body composed of his brothers and cousins. Abdullah created the council as part of his reforms and gave it a mandate to choose the heir.

Nayef has earned praise in the West for leading crackdowns on Islamic extremist cells in Saudi Arabia, which was home to 15 of 19 of the Sept. 11 hijackers.

He was harshly criticized for a 2002 interview in which he said that "Zionists" -- a reference to Jews -- benefited from the 9-11 attacks because it turned world opinion against Islam and Arabs.

He has also opposed some of Abdullah's moves for more openness in the strictly conservative society, saying in 2009 that he saw no need for women to vote or participate in politics. Even so, it seen unlikely that he would he would cancel Abdullah's reforms if he became king. They include the opening of a coed university in 2009 where both genders can mix, though many religious authorities forbid any mixing of the sexes.

Some believe Nayef would put any further changes on hold if he takes power.

There is thought to be little chance that the changeover at the top of Saudi Arabia's leadership would affect the country's close relations with the United States.

U.S. Vice President Joe Biden led an American delegation in the Saudi capital to offer condolences to King Abdullah after the death of Prince Sultan, who was also Saudi Arabia's defense minister and is credited with modernizing his country's armed forces, largely through huge arms deals with the United States.

On Thursday Biden met with members of the royal family. A White House statement said Biden noted Sultan's "lasting contributions to the enduring partnership between the United States and Saudi Arabia."