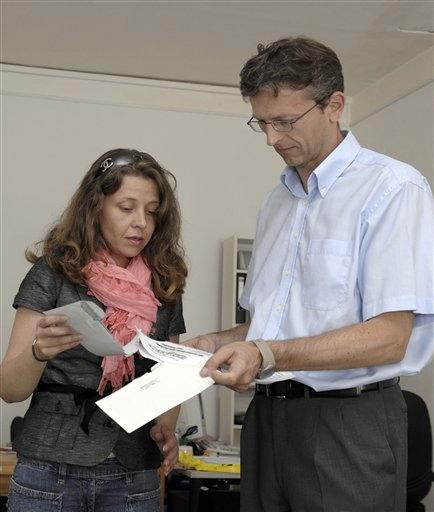 A European probe to Saturn's largest moon found a freezing, primitive but active world that, like Earth, seems to be doused with rains that gouge out rivers, erode rocks and form pools, scientists said Friday.

But Titan's rains appear to be liquid methane, not water. Black-and-white photos from the Huygens probe showed a rugged terrain of ridges, peaks and dark vein-like channels, suggesting that the moon 744 million miles away is scoured by the same forces of erosion that shape Earth.

"There is liquid that is flowing on the surface of Titan. It is not water — it is much too cold — it's liquid methane, and this methane really plays the same big role on Titan as water does on Earth," said mission manager Jean-Pierre Lebreton at a Paris news conference to announce results of the Jan. 14 landing.

His team of scientists described river systems and deltas, protrusions of frozen water ice cut through by channels, apparent dried-out pools where liquid has perhaps drained away, and stones — probably ice pebbles — that appear to have been rounded by erosion.

The bottoms of the dried-out river channels are coated with what seem to be particles of smog that fall out of Titan's atmosphere, coating the whole terrain. The dirt apparently gets washed off the ridges to collect in the riverbeds.

It did not appear to be raining when Huygens descended through Titan's haze on parachutes, "but it has been raining not long ago," said Lebreton.

Scientists: Triceratops May Not Have Existed

"Does it rain only once a year? Is there a wet season once a year? Does it rain more frequently? We don't know," admitted another member of the team, Martin Tomasko of the University of Arizona.

The area where the probe landed is "more like Arizona, or someplace like that, where the river beds are dry most of the time," he said. "Right after the rain you might have open flowing liquids, then there are pools, the pools gradually dry out, the liquid sinks down into the surface. Perhaps it's very seasonal."

Methane is a highly flammable gas on Earth. But on Titan, it is liquid because of the intense pressure and cold. Scientists believe the methane gets broken up in Titan's atmosphere, forming the smog that precipitates down to the surface.

But that also leaves a puzzle: If Titan's methane is continually mutating, why is it still found in the atmosphere?

"There must be some source of methane inside Titan which is releasing the gas into the atmosphere. It has to be continually renewed, otherwise it would have all disappeared," said Toby Owen, a scientist from Honolulu's Institute for Astronomy who was charged with studying the moon's atmosphere.

"We've got a flammable world, and it's quite extraordinary," he said.

Huygens was spun off from the Cassini mother ship on Dec. 24. The $3.3 billion Cassini-Huygens mission to explore Saturn and its moons was launched in 1997 from Cape Canaveral, Florida — a joint effort between NASA, the European Space Agency, and the Italian space agency.

The probe was named after Titan's discoverer, the 17th-century Dutch astronomer Christiaan Huygens.

Titan is the first moon other than the Earth's to be explored. Scientists think its atmosphere is similar to that of the early Earth and studying it could provide clues to how life arose here.