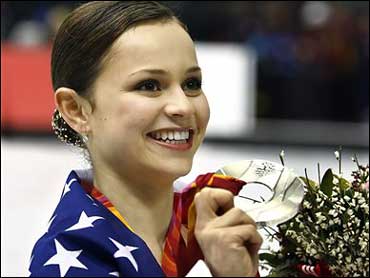 Shizuka Arakawa skated off with Japan's first medal of these Olympics — a gold in the showcase event.

What a way to end a shutout!

Arakawa did it with an elegance and technical brilliance that even had two-time Olympic winner Katarina Witt standing and applauding before the Japanese skater was done. Cohen fell twice and finished with a silver; Slutskaya fell once and took bronze.

How did Cohen bounce back from her poor start in the finals? Harry Smith and Tracy Smith asked her, and two former Olympic figure skating champs, on The Early Show Friday. Click here to get their thoughts.
The Japanese team has struggled in the mountains and on the ice in Turin. But Arakawa, third after the short program and a mere .71 points behind Cohen, was magnificent. Her spectacular spirals thrilled the crowd and, more importantly, impressed the judges.

She was emotionless for most of her breathtaking four-minute routine, then broke into a smile that only got bigger when scores were flashed. When her personal best of 125.32 points for the free skate were displayed, she flashed a "V" for victory sign then pumped her fist when she moved into first place with 191.34 points.

Cohen had already flubbed her first two jumps — and her shot at gold. That left Slutskaya, a two-time world champion and 2002 Olympic silver medalist. She lacked sparkle in her free skate and the fall ended any chance she had.

That ended Russia's hopes for an unprecedented sweep of the gold after taking the men's, pairs and ice dancing titles.

Arakawa, 24, became the first Japanese Olympic gold medalist in figure skating and just the second with any medal; Midori Ito, one of Arakawa's idols, won silver behind Kristi Yamaguchi in 1992. Ito led the cheers of the flag-waving Japanese in the crowd.

Cohen's history of flopping in the biggest international events bit her again.

Even her first U.S. title last month came with some questions because nine-time champion Michelle Kwan was sidelined. She also collapsed in the 2003 and 2004 national championships that went to Kwan, and the 2004 worlds won by Arakawa.

Not to mention the Salt Lake City Olympics, where she faded from third after the short program and Sarah Hughes soared from fourth to the top.

Emily Hughes, Sarah's 17-year-old sister, fell on a triple loop and shortened another jump, but her seventh-place finish was remarkable for a newcomer.

"I am really excited about what happened, this being my first Olympics and my first big international. I am taking away a lot from this competition," said Hughes, who replaced the injured Kwan and arrived in Turin just a week before the free skate.

The other American, 16-year-old Kimmie Meissner of Bel Air, Md., wound up sixth, one spot down from her standing after the short program.

In other action at Turin: