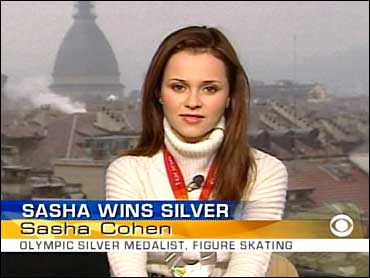 American figure skater Sasha Cohen was the leader as the finals began at the Winter Games in Torino, Italy, and was widely considered the favorite, along with Russia's Irina Slutskaya, to take the gold medal.

But Cohen fell doing a triple lutz at the start of her long program, and stumbled on her next jump.

Slutskaya had problems of her own, and Japan's Shizuka Arakawa wound up taking the gold.

After Cohen's miscues, she recovered so well she won silver.

How did she come back from such major letdowns at the start? How did she muster the strength and fortitude to go on?

"You know," she told Tracy Smith, "I was really well-prepared, and mentally I was in a good place, and I was just able to keep thinking positive and be there for myself. And, you know, you don't know where it comes from, and you just have to keep believing, and you don't know how tough you are until you face something like that."

Smith says Cohen was so sure she was out of contention for a top spot she changed out of her skating costume and had to put it back on to claim her medal.


Smith filed a report for Web viewers only that you can see by .
On The Early Show Friday, Cohen told co-anchor Harry Smith, "I got off to a rough start. But I found some courage and deep inside, I just — I kept persevering and believing and, you know, it paid off, and I really — the whole rest of the program was very emotional for me. And I enjoyed it.

"You know, it wasn't what I was looking for, but it was still an incredible night, and I feel so lucky to have a silver medal.

"I still was able to have a good time with it, even though everything didn't quite go as planned."

Cohen told Harry, "I felt really good. I wasn't too nervous. I was calm, in a really good state. I think I had a problem with two of the jumps, and I fought hard for them, but technically, they weren't there, and I, you know, was able to come back really strong and have the courage to persevere.

"But, you know, it wasn't my night. I'm sure I'll have a lot of time to reflect back on that. You learn four minutes every four years isn't going to make or break my life. It's part of the process, the journey and I'm definitely gonna learn from that."She downplayed any possible injuries, telling Harry, "I definitely was dealing with some different injuries and it made it a little tougher to train, but, you know it happens in sports, being an athlete. It's nothing new. And, you know, it was really important for me to be here. I persevered through a lot of tough times and training for them, but it was still great to be able to come out and have some great times out there."

Her performance impressed , who told Harry, "It was heartbreaking for me to watch her falling twice in the beginning, and then I really felt then she got so upset about herself that now she saw probably, 'I have to nail the rest.'"

Boitano concurred, saying, "I think that where she came into play, where the aggressiveness came into play after those two jumps, she said, 'I'm not gonna to miss anymore.' She really needed to start the program with that kind of energy."

But he and Witt felt Cohen's warm-up left much to be desired, and that carried into the real thing.

"After she fell the second time," Witt said, "I had my head in my hands thinking, 'Oh, my God, I hope she does the rest. And she really did. Then you just keep shaking your head because you think, 'Oh, my God, you can see the potential she has and the quality of her jumps, (which) are beautiful.' Her skating was breathtaking, and then it's even more sad that she has those two falls in the beginning, and then being able to pull it together like she did, that was incredible."

Boitano observed, "It's hard to recoup from that (the poor start). It's hard to go on. She really pulled it together and started fighting for the rest of the program."

Editor's notes: Witt has a new book out called "Only With Passion." To read an excerpt, click here.

Boitano started a "Youth Skate Program" in 1998 to introduce inner-city kids to ice skating as what his Web site calls "a safe, fun and challenging after-school activity." The site says more than 3,000 youngsters have taken part. For more on the program, click here.