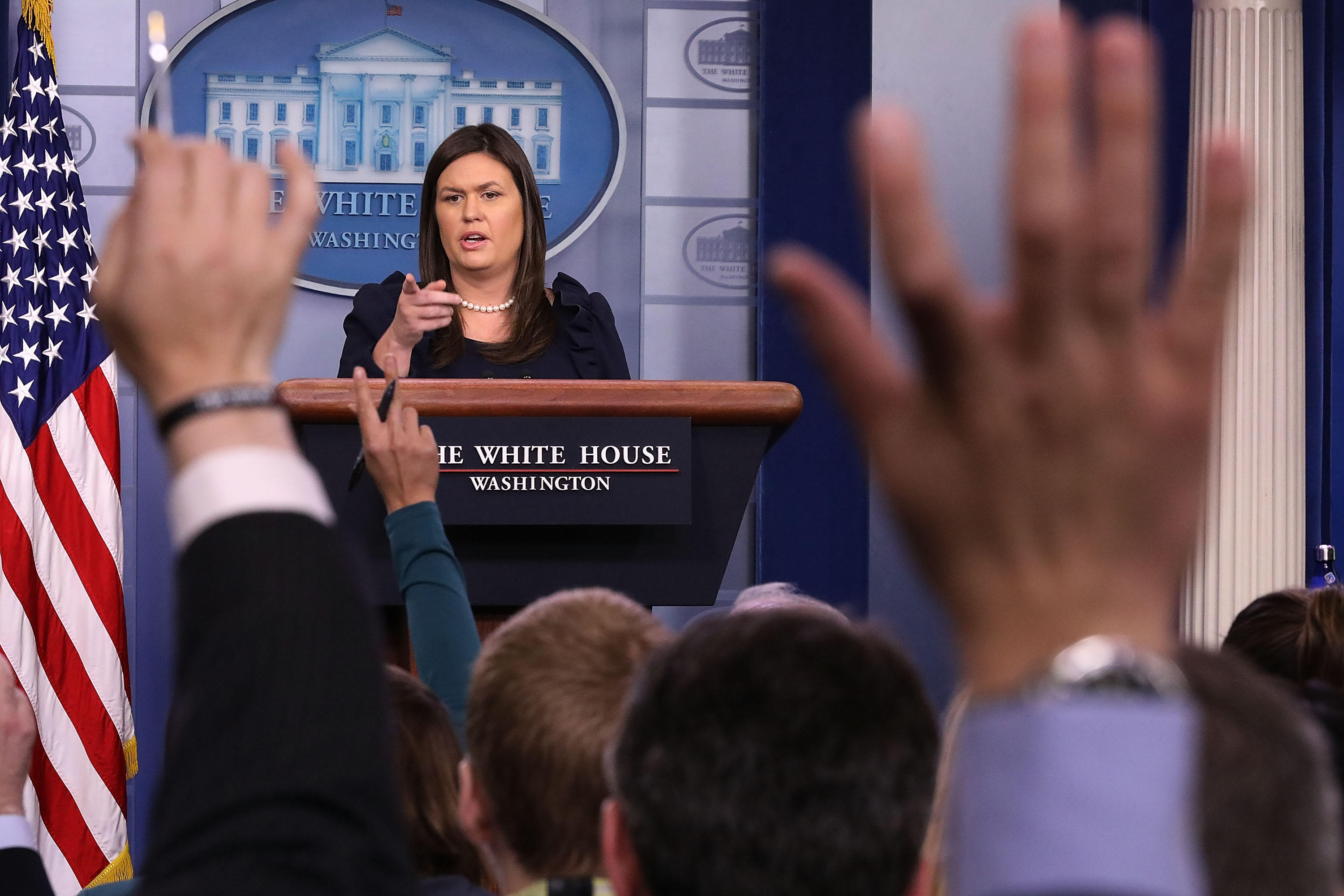 It was, as usual, standing room only in the White House Briefing Room Wednesday, as Sarah Sanders presided over her 100th formal session before reporters. She did not mention milestone, though she appeared amused when one reporter offered congratulations. No cake was served.

She began with a few announcements, telling reporters that President Trump had been briefed earlier in the day by Homeland Security Secretary Nielsen on the looming threat to Hawaii of Hurricane Lane, now a Category 4 storm.

It was her first briefing in a week and came a day after the convictions of former Trump associates Paul Manafort and Michael Cohen, the subject that dominated questions from reporters.

She was prepared, and responded by saying again and again that "the president has done nothing wrong and there are no charges against him." Other questions on the subject that she was not prepared to answer, and she referred reporters to the president's outside counsel.

But there are clear indications she prefers fewer and shorter briefings since conducting her first one as White House press secretary on July 26 of last year.

"We get information out in a number of different ways," says Sanders, defending the diminished frequency of her briefings. She cites social media, which includes frequent avalanches of tweets by President Trump. "We also have a president who's extremely accessible and engages with the press a lot more."

He's certainly accessible to Fox News, who Wednesday has its 30th interview with Mr. Trump since he took office, many times more than any other news organization.

Of the adversarial and sometimes combative tone of some exchanges at her briefings, Sanders says "it certainly has its moments."

"My job is to answer whatever the questions are," though reporters are often dissatisfied with her responses. It is balanced out by her dissatisfaction with the "gotcha" and occasionally accusatory questions she faces.

"My goal is to go out there and do the best I can to represent the president and to communicate his message and his policies," she says about her objective in the briefing room.

She says some reporters "are doing more to perform and get a clip for a news segment, than they are to actually get information." She mentions no names.

"I think if we could focus on pushing out information, versus just trying to have either a 'gotcha' moment or a heated exchange they could play on their nightly news, I think everybody would be better served."

At the same time, Sanders says her criticism does not apply to all reporters at her briefings. She volunteers that some "are working hard to just get information so that they can report on it." But she's quick to add, that "there are certainly some I think are a little too focused on the wrong things."

She says Mr. Trump sometimes watches her briefings, "if he has a chance…but does not watch every time."

There's no denying her job can be a gateway to burnout, but Sanders, 36 and a mother of three, says she wants to remain press secretary.

"I certainly hope that as long as I can continue to be productive and helpful to the president, he'll keep me around," she said in an interview Tuesday. "I consider every single day that I'm here to be a privilege and I'll keep showing up every day and work hard."