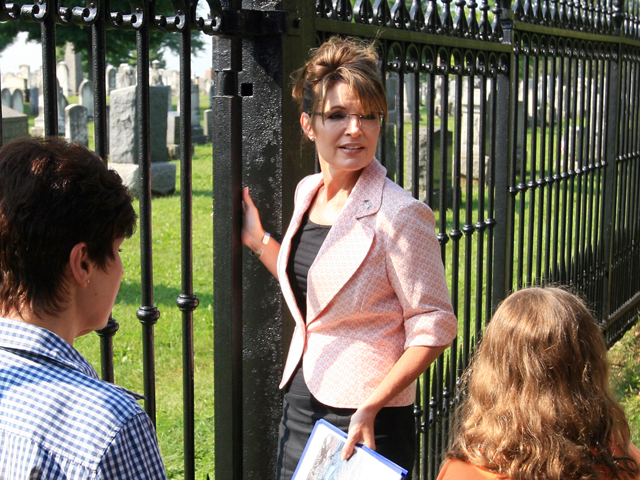 Sarah Palin and her advisers are refusing to tell members of the media where she is going on her current bus tour - and the former Alaska governor seems to be enjoying the cat and mouse game that's resulted.

"I don't think I owe anything to the mainstream media ... I want them to have to do a little bit of work on a tour like this, and that would include not necessarily telling them beforehand where every stop's going to be," she told fellow Fox News employee Greta Van Susteren in an interview from the bus.

Yet the reemergence of the GOP's larger-than-life 2008 vice presidential candidate - who says she is strongly considering a run for president - is undeniably news. Which is why more than a dozen national news outlets have sent reporters and producers out to try and follow Palin.

Since Palin and her team won't share where the potential candidate is headed, reporters and producers have little choice but to simply stay close to Palin's bus. This has resulted in scenes of the Palin bus tooling down the highway followed by a caravan of 10 or 15 vehicles all trying to make sure they don't lose sight of the Palin bus.

It adds up to a dangerous situation, says CBS News Producer Ryan Corsaro.

"I just hope to God that one of these young producers with a camera whose bosses are making them follow Sarah Palin as a potential Republican candidate don't get in a car crash, because this is dangerous," he said.

Corsaro asked a member of Palin's team if he thought it was dangerous to have reporters forced to chase her from stop to stop. "You're the ones that are trailing us," he replied.

Palin's representatives insist to reporters they have no idea where the candidate is heading next - though someone is presumably telling the bus driver where to go. (It's worth noting that on the current leg of the trip, at least, much of Palin's team is driving in an SUV that is actually in front of the bus.)

Palin says she isn't offering advance notice for the trip because "we don't want to disrupt people on their trips and their vacations," which is somewhat hard to fathom. (An unannounced trip, which doesn't allow vacationers to plan for the disruption created by the potential candidate, her entourage and the press, would seem more disruptive than a scheduled trip.)

The confusing nature of the trip - which was planned by two advance aides recently hired by Palin - played out at a coffee shop this morning, where Palin stopped to shake hands with locals in what looked to reporters like the very definition of a campaign-style photo-opportunity. Multiple people showed up at the event saying they were there because they wanted to see history --but they wouldn't say where they had come from or how they had heard about the event.

"I just want to say that I'm witnessing history happening," one woman said - three times. She wouldn't give her name.

Palin's team isn't just ignoring the press; it's actively trying to misdirect reporters. Tuesday morning, for example, Palin's bus was running out in front of the hotel where she had stayed, prompting a gaggle of media to dutifully gather outside. Palin had already slipped out a side door early in the morning for a visit to the Gettysburg visitor center and battlefield.

(At left, video of Palin's visit to Gettysburg.)

She appears to be trying to show that she doesn't need mainstream media outlets (other than Fox News, where she remains a contributor) to connect with the American people.

"It feels like she's baiting us and treating us like paparazzi and make the 'lamestream media' appear that way," said Corsaro.

Palin has repeatedly cast the press corps as treating her unfairly, and has tried to make her Facebook and Twitter accounts primary sources of information about her - a strategy she is continuing with the bus tour, for which she is directing interested parties to her political action committee website. (Information about a visit only goes up after she has made the stop.) Earlier this month, she discussed her feelings about the media with Fox News' Sean Hannity, complaining about "that goofy game that has been played now for too many years with the leftist mainstream media trying to twist the candidates' words and intent and content of their statements."

"I think to start with, we ignore some of these reporters and their requests for us to comment and be interviewed," she said. "We know going into what they are going to do to us to as conservatives -- so, why participate in their game?"