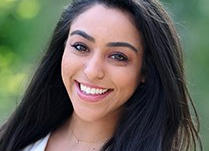 SANTA ANA, Calif. -- On a breezy morning, Floria Hakimi smiled as her photo was snapped on the steps leading up to a small plane that was supposed to usher her to a workshop for real estate agents in Southern California. "Flying out to LA," she posted on her Instagram account with the photo of her donning sunglasses and a broad grin.

Later that day, the twin-engine Cessna 414 carrying the 62-year-old real estate agent and four others plummeted out of the sky and crashed into the parking lot of an Orange County strip mall, killing everyone on board. Dashcam video showed the twin-engine Cessna as it fell from the sky, head first, around 12:30 p.m. Sunday.

Hakimi and two victims were co-workers at Pacific Union International, a San Francisco Bay Area real estate firm. One of them, 42-year-old Lara Shepherd, was married to the plane's 53-year-old pilot, Scott Shepherd.

Another was 29-year-old Nasim Ghanadan, who saw Hakimi as a mentor in the real estate industry, Ghanadan's brother said. Hakimi's 32-year-old son, Navid Hakimi, was also a passenger on the trip.

Ghanadan loved to cook Persian and American food and loved dancing. She grew up in the Bay Area and was quick to make friends with just about everyone she met, said Aryan Ghanadan, her 19-year-old brother.

"She was just larger than life, always, always laughing," he said. "Just always the life of the party."

The plane took off from Buchanan Field Airport in Concord, California, according to the Federal Aviation Administration.

The pilot declared an emergency but didn't state the nature of his problem before crashing about a mile from John Wayne Airport, striking four parked cars, National Transportation Safety Board investigator Albert Nixon said Monday.

Nixon didn't know how much time elapsed between the call and the crash.

The plane was heading to the airport southeast of Los Angeles and had been cleared to land when it came down in the parking lot of a Staples store and a CVS pharmacy, NTSB officials said.

There was no fire and nobody on the ground was hurt, Orange County fire officials said.

Witnesses in watched in horror as the plane flew low over the shopping area near the upscale South Coast Plaza mall and nosedived into the parking lot. Customers ran out of a nearby restaurant and saw the wreckage of the white plane with green and blue trim.

Navid Hakimi, of Los Angeles, was a musician and a DJ. He also has a son, said longtime friend Pantea Tadi. Last month, Hakimi posted a selfie of him with his mother on his Instagram page, saying she had come down for a surprise visit on his birthday.

"Spending the day with both her and my beautiful son is literally all I could have asked for," he wrote. "My heart is bursting!"

The Shepherds, of Diablo, California, have two children, ages 5 and 7, according to Pacific Union. He was a great cook, and she knew about art, said neighbor Kate Montgomery.

"Our entire Pacific Union family is mourning the loss of our colleagues, family and friends," the company's chief executive Mark A. McLaughlin said in a statement. "Life is precious and we are focused on comforting the loved ones affected by this devastating event."

The FAA and the NTSB are investigating the cause of the crash.

The plane is registered to a San Francisco-based real estate consulting company, Category III, according to an FAA database. A phone call to the company was not immediately returned.

The 1973 Cessna was certified with the FAA through October 2019, online records show.