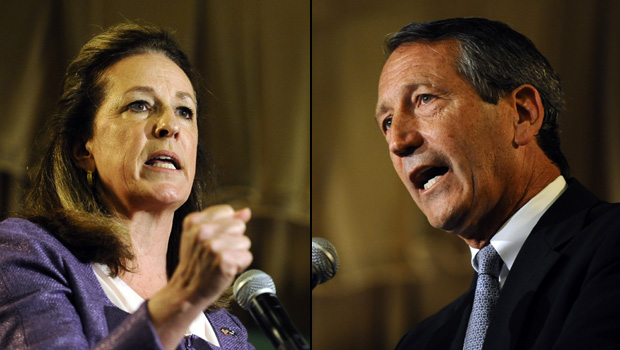 With eight days to go before the May 7 special election, Sanford stressed his efforts to rein in spending as a three-term member of Congress and as a two-term governor. The Republican noted that he was the first governor in the nation to turn back economic stimulus funds.

But Colbert Busch reminded Sanford that he one used taxpayer funds to "leave the country for a personal purpose" — referring to the extramarital affair with an Argentine woman he had while governor. Sanford remarked that he didn't hear the response and asked to have the question repeated.

Colbert Busch, saying she would use her years of business experience including her work in the steam industry, criticized Sanford for voting in Congress against harbor dredging and building a higher bridge so the Port of Charleston could handle a new generation of larger container ships.

Sanford shot back that, if it bothered her so much before "I don't think you would have written me a $500 check as I left the Congress to run for governor. I don't think it must have bothered her that much." He said he opposed the money coming in the form of earmarks.

The Democrat responded that Sanford had years ago told her he supported trade and dredging.

"You didn't tell the truth," she told Sanford. "You turned around and did the opposite."

Colbert Busch also said that, if elected, she would return 10 percent of her congressional salary to the government.

The candidates also differed over issues such as immigration reform, the federal health care overhaul and abortion during the debate sponsored by the Patch news service, the South Carolina Radio Network, Charleston television station WCBD and which was telecast by C-SPAN.

Sanford tried to tie Colbert Busch to House Democratic Leader Nancy Pelosi and labor unions. She said she was independent and planned to represent the district's voters, first and foremost. The debate, attended by 500 people, was frequently interrupted by applause and shouts from the audience.

"We're at an incredible tipping point as a civilization and I think if we don't get spending right in Washington, D.C., there will be real consequences," Sanford said. "I've gotten into this race with the hope of taking what I've learned in Congress, what I learned in the governorship and what I've learned on the way up and on the way down and applying it to what I believe is the great debate of our civilization, which is indeed, how do we get our financial house in order."

"Here's the fundamental difference. This is not the end of our time as we know it," she said. "The sky is not falling Henny Penny. In fact our best days are ahead of us."

The debate was their first joint appearance in the campaign that began after then-U.S. Rep. Tim Scott was appointed to the U.S. Senate seat vacated by fellow Republican Jim DeMint.

Sanford and Colbert Busch won their respective party primaries — Sanford after a GOP runoff. They are now vying along with Green Party Candidate Eugene Platt in the May 7 special election in the district.

The latest finance reports filed with the Federal Election Commission show Colbert Busch has raised more money than Sanford — about $1.2 million to about $790,000. But money from his old campaign accounts left Sanford with about the same amount as Colbert Busch for the campaign. Stephen Colbert has appeared at several fundraisers for his older sister.

Sanford held the congressional seat for three terms in the 1990s.

Colbert Busch is currently on leave from her job as director of business development for Clemson University's Wind Turbine Drive Testing Facility in North Charleston.