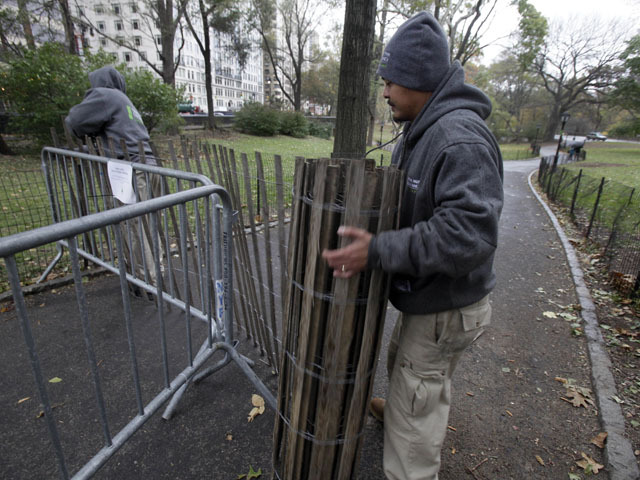 NEW YORK Residents of New York and New Jersey who were flooded out by Superstorm Sandy waited with dread Wednesday and heard warnings to evacuate for the second time in two weeks as another, weaker storm spun toward them and threatened to inundate their homes again or simply leave them shivering in the dark for even longer.

In New York, Mayor Michael Bloomberg ordered police to use their patrol car loudspeakers to warn vulnerable residents about evacuating, one of a number of measures that the beleaguered city was taking even as weather experts said Wednesday's nor'easter could be weaker than expected.

"Even though it's not anywhere near as strong as Sandy -- nor strong enough, in normal times, for us to evacuate anybody -- out of precaution and because of the changing physical circumstances, we are going to go to some small areas and ask those people to go to higher ground," Bloomberg said Tuesday.

However, many of those affected by Sandy in Queens and Staten Island plan to ride out the storm, CBS Station WCBS New York reported.

The Federal Emergency Management Agency put a number to the storm's homeless in New York and New Jersey, saying 95,000 people were eligible for emergency housing assistance. In New York, New Jersey and Connecticut, more than 277,000 people have registered for general assistance, the agency said.

In New Jersey, public work crews are building up dunes along the Jersey Shore to help protected the battered shoreline. Gov. Chris Christie warned Wednesday that New Jersey may suffer a setback in its Superstorm Sandy recovery efforts as a result of the new storm.

Evacuation orders have already been issued in a number of communities and new shelters set up.

Storm surges of up to 3 feet and high winds have been predicted.

Christie said he realizes everyone is tired from Superstorm Sandy but that no one should let their guard down.

The number of customers without power in New Jersey has dropped to under 400,000. But Christie said new outages could occur inland because of the heavy wet snow forecast with the nor'easter.

Atlantic County, in the southern part of New Jersey, activated its emergency operations center and told residents to restock their emergency supplies.

Officials were waiting for the first high tide around 1 p.m. to see if flooding would occur and also hoping the winds would not lead to more power outages.

"We have almost everyone who possibly can be reconnected back on. The idea we could now be facing power outages again does not come at a good time," county spokeswoman Linda Gilmore said.

Some coastal areas have been told to evacuate again. That's the case in Brick, N.J., an area along the Jersey shore that is basically deserted now, reports CBS News correspondent Ben Tracy. Brick Township has more waterfront property than any town in New Jersey. The fear is that already high water could once again swamp these areas when the nor'easter hits the shore.

"If you don't realize what Mother Nature can do now, and realize you should not be in some of those low lying areas, I don't think you will ever realize it," Mayor Stephen Acropolis told CBS News.

On the barrier islands, school buses were picking up the few remaining holdouts, and front loaders were working overtime in many neighborhoods. One of the big concerns is all the debris. They have been racing the clock to try to get the garbage out of the area so when strong winds come, pieces of debris don't turn into missiles.

Forecasters are warning that moderate coastal flooding may occur and say large breaking waves of 8 to 12 feet on top of any surge could add to areas already suffering from significant beach erosion.

But weather experts had some relatively good news. As the storm moves up the Atlantic coast from Florida, it now is expected to veer farther offshore than earlier projections had indicated.

Storm surges along the coasts of New Jersey and New York are expected to reach perhaps 3 feet, only half to a third of what Hurricane Sandy caused last week. While that should produce only minor flooding, it will still likely cause some erosion problems along the Jersey coast and the shores of Long Island, where Sandy destroyed some protective dunes.

And it still carried the threat of wind gusts that could bring down tree limbs weakened by Sandy. High winds, which could reach 65 mph, could extend inland throughout the day, potentially stalling power restoration efforts or causing further outages.

The nor'easter could set back repairs to NJ Transit's rail system that's offering limited service in the wake of Sandy.

Major airlines are scrapping flights in and out of the New York area ahead of this storm. United and American plan to suspend operations in the region Wednesday afternoon. Other airlines are encouraging passengers to reschedule by allowing them to do it for free.

Airlines are quick to cancel flights ahead of major storms to avoid stranding aircraft and crews. Doing so also lessens storm-related financial losses. As of noon Eastern, about 1,200 flights had been canceled for Wednesday, according to flight tracker FlightAware. About 40 percent of those are at Newark Liberty International Airport in New Jersey.

United, the world's largest airline, suspended most service in New York starting at noon. It warns that the bad weather will likely cause more delays and cancellations throughout the Northeast.American Airlines is shutting down in New York at 3 p.m. It stopped flights to and from Philadelphia at noon.

Most other airlines, including Delta Air Lines Inc. and JetBlue Airways Corp., are asking passengers to reschedule their Northeast flights for a later date. They're waiving the usual change fees of up to $150.

On New York's Staten Island and Long Island, thousands are still without electricity. They could get 60 mile-per-hour winds and flash flooding. While New York City officials strongly encouraged storm-ravaged communities to seek higher ground, some refused, choosing to stick close to the belongings they have left.

The city was closing all parks, playgrounds and beaches, as well as ordering all construction sites to be secured. Tuesday evening, the mayor ordered three nursing homes and an adult care facility evacuated from Queens' vulnerable Rockaway Peninsula because of fears the weather might knock out electricity already being provided by generators. About 620 residents were being moved.

Since the superstorm made landfall more than a week ago, killing many of its more than 100 victims in New York City and New Jersey and leaving millions without power, police said overall crime has actually gone down. There are few reports storm-damaged homes being looted.

But Alex Ocasio wasn't convinced. The nursing home worker planned to ride out the latest storm in his first-floor Rockaway apartment -- even after seeing cars float by his front door during Sandy.

As the water receded, men dressed in dark clothes broke down the door and were surprised to find him and other residents inside, he said.

"They tried to say they were rescue workers, then took off," he said.

He put up a handmade sign -- "Have gun. Will shoot U" -- outside his apartment and started using a bed frame to barricade the door. He has gas, so he keeps the oven on and boils water to stay warm at night.

"It gets a little humid, but it's not bad," he said. "I'm staying. Nothing can be worse than what happened last week."

Police Commissioner Raymond Kelly said it wasn't wise to stay put. "I think your life is more important than property," he said.

Police have arrested 123 people citywide since the storm blew in last week, 54 burglary arrests and 41 others stemming from gas line disputes, Kelly said. Most were in areas suffering from the storm.

"You would think, under the circumstances, you would see much more," Kelly said. "We haven't seen that."

Burglaries were up 6 percent citywide compared to the same period last year, but overall crime was down 27 percent, police said.