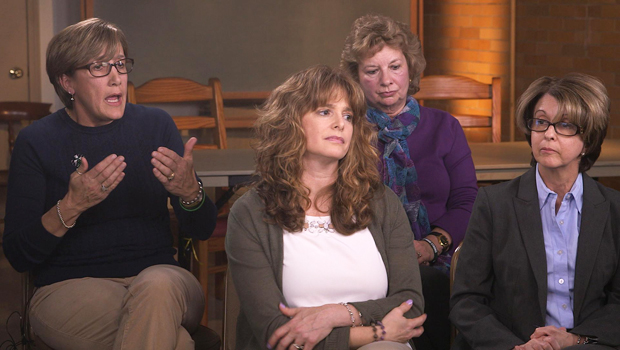 It's been nearly two years since a disturbed young man, Adam Lanza, opened fire at the Sandy Hook Elementary School in Newtown, Conn., killing 20 young children and six adults. Some of the teachers are beginning to tell stories of what they heard and saw that day -- and trying to make certain what happened in Newtown can't happen elsewhere. Our Cover Story this morning is reported by Jane Pauley:

"Something like this rips you to your core, and we came back to school ripped to shreds," said Abbey Clements, a 2nd grade teacher. "But we came back to do the best we could with these kids who we loved and we got lucky enough to survive with."

She was one of four women working at Sandy Hook Elementary School on December 14, 2012.

All four and all of the children in their care got out of the building safely.

All four only now are speaking out about the impact of that terrible day.

"Nobody cowered under a chair," said Clements. "Everybody took care of those kids the best that we knew how to in the insanity that was unfolding before us."

Reading specialist Becky Virgalla was in a meeting in a conference room near the school's front door. "We heard this loud noise and I thought the roof was collapsing," she said. "I just looked at someone and said, 'What was that?'"


A 20-year-old gunman had blasted through the glass entryway with a semi-automatic rifle.

"Three people got up and ran out into the hall. We were ready to follow them out to go investigate the sound. I was three steps away from going out into the hall when my principal, Dawn Hochsprung, shouted back, 'Shooter! Stay put!'"

Someone had called 911 on a phone linked to the school intercom, which in the chaos was accidentally turned on. The ensuing gunfire could be heard in classrooms all over the school.

"The speaker, I just wanted to climb up on the table underneath it and rip it down," said Clements, "but I was scared 'cause we were always told to stay low, and I had no idea where the shots were coming from. So I tried to sing songs, and we tried to read, and many of us did similar things."

The shooter went into two first-grade classrooms. Carol Wexler's second-grade classroom was directly across the hall. For her, there was no turning off the sounds only feet away.

"I haven't told this story," Wexler said. "I think this is a very difficult conversation to have just because of what it brings up for me."

Five minutes: That's how long it took the gunman to fire 154 shots -- the last, to take his own life.

"When I gave my report to the police I said, 'Oh, half-hour, 45 minutes," said Virgalla. "It seemed to go on forever. I heard every one of those 154 shots. It just went on forever."

One month later, in a borrowed building in a neighboring town, Sandy Hook teachers faced the collateral damage: children emotionally wounded, jumping every time a book fell or a door slammed.

"The old rules didn't apply anymore," said Pauley. "How did your teaching change in January?"

"It was incredibly challenging," said Clements.

Wexler said they cared for the children "not just the academic, but emotionally."

"The rest of the winter and that spring was less about education than nurturing?"

"Well, no, I think it was a combination of both," Wexler said.

Monsignor Robert Weiss of Newtown's Saint Rose of Lima Roman Catholic Church was called to the school right after the shooting: "I was asked by one of the first responders if I wanted to go in and give a blessing. I looked in and I could see kind of the streams of blood that were coming from the corridor."

He says the community is still healing.

"We're all grieving in a very different ways, and that grief takes a lot of different places, especially when it comes to anger, and where does that anger get directed?"

For 37 Sandy Hook teachers, that anger has now turned to activism.

Abbey Clements said that when she goes home, "I do lesson plans and I research gun violence prevention. That gives me a purpose."

In May, they came together as Sandy Hook School Educators for Gun Sense.

At a meeting last month, a guest speaker was Erica Lafferty, whose mother, Dawn Hochsprung, was one of the shooter's first victims.

"The last day I saw my mom was the Sunday before the shooting," Lafferty said. "My mom would be so proud of you for being here and for standing up for what you guys know in your heart of hearts is the right thing to do."

Carol Wexler told Pauley, "For myself, at this point I feel that I have a responsibility to make sure that I at least try and do something. I look at the young children in school every day, and I think, 'I can't let them grow up in a society where this is acceptable.'"

Pauley asked if being a Sandy Hook survivor makes her responsible?

"I don't know if it makes me responsible, I just know that I don't want other people to go through what we went through," Wexler said.

They say they want to close loopholes that allow online and private gun sales without background checks.

In a survey 74 percent of NRA members supported universal background checks for all gun sales.

But, as an organization, the National Rifle Association emphatically does not.

"We're at a tipping point," said Mary Ann Jacob, who works in the Sandy Hook school library. " We're up against a really big lobby, but we know we can make a difference."

"This is like when cigarettes got so much pressure, and all the laws were made against all the tobacco companies. And the same thing with seat belts and car safety.

"And you know what? Not everyone wears their seat belt. That doesn't mean we have to say, 'Oh well, forget it then. Let's not make a law about buckling up.' Some of the gun proponents -- they're afraid of these laws somehow infringing on their rights, when in reality there's laws around everything we do."

They insist this is not a political issue.

"In this situation, it has nothing to do with whether you're a Democrat or a Republican or an Independent," said Wexler. "It's, 'Do you want to keep guns out of the hands of dangerous people?'"

"My husband is a member of the NRA," said Jacob, "and there's guns in my home in a safe. My husband and my kids like to hunt, and they like to do skeet shooting.

"This discussion really comes down to how can we prevent gun violence, not how can we take people's guns away."

They are pushing for a ban on high-capacity magazines for assault weapons.

"The [fewer] bullets in a magazine, in our case certainly, there could've been more survivors," said Jacob.

Pauley asked, "I'm going to ask the devil's advocate question: Is there no one here that that day didn't wish they had a gun?"

Becky Virgalla replied, "I did not even think of that."

"Never thought of that," said Wexler.

"No," said Jacob. "And you know what? If there had been someone at the entrance to our school with a gun, they would've been dead, too. There's a reason they call them assault weapons. It's an impossible barrage to survive from. We survived because we were lucky and because he was stopped for whatever reason before he could do more damage."

The Sandy Hook educators say they don't want a legacy counted in children they helped keep safe December 14, 2012, but in the kids they'll help keep safe from here on.

"There have been nearly 100 shootings at American schools since our tragedy," said Abbey Clements. "That's an unacceptable number. Over 31,000 Americans die each year by guns. What's it going to take? We have to have that confrontation. We have to be ready to have that argument."