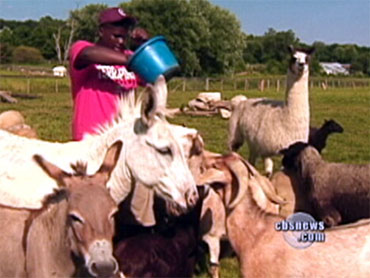 Animals do amazing things. Some can even change the lives of their keepers, CBS News Correspondent Seth Doane reports.

Gladys - a potbelly pig - was rescued from a flooded porch during Hurricane Katrina.

Taz - an emu - would've likely wound up at a hunting farm.

The owners of a miniature horse named Dakota couldn't afford to keep him.

Chenoa Manor in Avondale, Pa., is a sort of sanctuary of second chances.

"They were unwanted, neglected; they were left behind," said veterinarian Rob Teti. "Many of them were destined for slaughter."

Teti relies on a group of young volunteers to care for the animals.

"They have a lot of parallel stories since the animals come from less-than-stellar backgrounds and so have a lot of the teens here," Teti said.

Teens like 19-year-old Josh Rice, who grew up in Baltimore.

"After my first trip, I fell in love," said Rice. "Wow, this was a lot different from the city."

A once shy kid, he figured playing sports might be his only shot out of his inner-city neighborhood.

"I don't even know if I'd be going to school if I stayed," Rice said.

But his mom, a teacher's aide, stressed the importance of school.

"Education to me is just one of those things that, you know, no one can take from you," Rice's mom Tanisha Smith said.

So when Rice was just 11, he applied and was accepted to The School at Church Farm, a boarding school in Exton, Pa.

Part of the school's curriculum is to get students out of the classroom and give back to the community, and some students like Rice have found peace - and a bit of themselves - at the farm sanctuary.

The farm has become a safe haven for the boys too.

"It's a very open environment which allows you to make mistakes," Rice said.

And they can thrive in a place where they're clearly needed.

"The animals and the environment also allows you to come out of your shell," Rice said.

Now Rice hopes to become a veterinarian. He's been accepted into the University of Maryland, providing him a chance to give back to animals that gave him so much.

The School at Church Farm: http://www.gocfs.net/