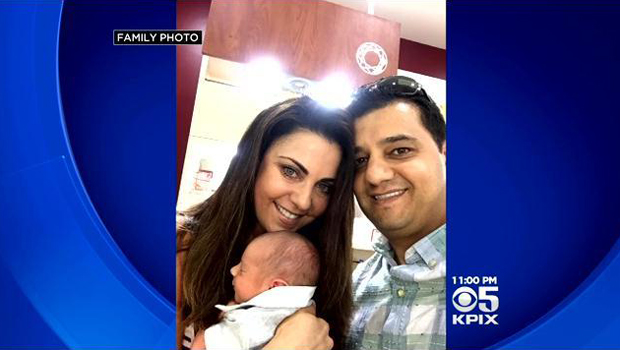 Haseeb and Christy Amireh have been stuck living in hotel after hotel in the state of Tabasco in Mexico with their newborn son, Grayson.

"We just want to get home," Christy told KPIX-TV via Skype.

But Grayson, who was born April 16, has no birth certificate, so he can't get a passport to fly home.

"There are still agencies taking ... intended parents, like us, so we'd like to get the word out," Haseeb said.

Unable to have children, the San Jose couple turned to surrogacy. It's legal and more affordable in Tabasco, and surrogacy agencies are everywhere there.

The couple was with the surrogate during the birth, but their magical experience quickly turned into desperation.

Their friends back home in the San Francisco Bay Area feel helpless.

"The week of the birth, all certificates for surrogacy was pulled, no rhyme or reason," said Bobby Khuller, a family friend.

U.S. Rep. Eric Swalwell, D-California, told KPIX-TV, "From what we learned, the governor in that state has put a moratorium on all birth certificates for surrogate families ... I think this just highlights why it's really important to understand the laws of any country that you're traveling to to make a health care decision."

"Mexico does not have the systems in place like it does in the U.S. If they say their law is a law, it may or may not be the law," Caballero said. "Bribery is not uncommon in that country. Look at the cartels."

Haseeb and Christy said they won't leave the country until Grayson is with them. That means their jobs and life are on hold.

The couple is working with a lawyer in Mexico, and they have been in contact with the U.S. State Department.