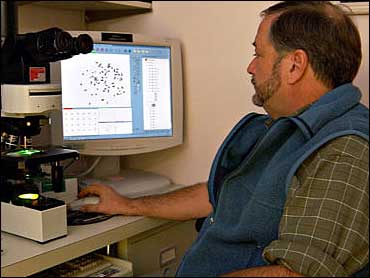 Tucked into a corner room of a Mission-style building up on the San Diego Zoo's Hospital Hill is a modern-day Noah's Ark.

Contained in four deep-freeze tanks is an incredible menagerie of some of the rarest animals on the planet, including pandas, condors and even a California gray whale.

The animals aren't on display, of course. Tissue samples from each are stored in small plastic vials, which are submerged and frozen in liquid nitrogen at minus-196 degrees Centigrade.

When scientists first created the so-called Frozen Zoo 25 years ago, they had no idea why. Freezing live cells of endangered species just felt right.

Today, that foresight is about to pay off.

Come March, San Diego Zoo scientists are optimistic that life will spring from their frozen menagerie, the largest such collection known.

Grazing on a farm in Iowa are 11 cows pregnant with endangered bantengs. Hunted for their slender, curved horns, these white-stockinged animals, also known as Bali Cattle, number fewer than 8,000 in the wild, mostly scattered in small herds on the island of Java.

Scientists at Advanced Cell Technology, which caused quite a ruckus last year by trying to clone human embryos, fused the Frozen Zoo's banteng DNA into 30 cows' eggs, zapped them with electricity to prompt development and hoped for a banteng birth.

This summer's experiment has turned out much better than anyone expected, with scientists giddily predicting as many as six cloned bantengs calling a cow "mom."

"We are going to end up with a small herd," said Advanced Cell's Dr. Robert Lanza.

What to do with this "herd" is still under discussion. The ultimate goal is to place any cloned animals alongside the bantengs currently on display in the San Diego Zoo's Hoof and Horn Mesa.

But the scientists want to first ensure the animals are healthy for travel and have enough social skills to integrate and thrive with the naturally born bantengs.

Many hope this novel, cross-species cloning experiment will someday turn into a routine and powerful tool in conserving endangered species - and, perhaps, even revive extinct animals.

"This isn't a stunt," said Oliver Rider, head of the zoo's Frozen Zoo program. "It's a new arena and we have the responsibility to see what benefits may come from this technology."

How to rejuvenate dying species has always been a conundrum for conservationists. Do you try to motivate the endangered species in the wild or in captivity? What is the prudent level of human help for pandas and other animals that have a notoriously tough time conceiving?

Rider and his fellow conservationists say cloning is not the solution. Preserving habitats, hunting bans and other conservation methods are a much higher priority. Still, the technology could be a useful tool, especially when it comes to genetic diversity.

Instead of relying on the existing and limited gene pool of the live endangered species, scientists hope they can use cloning to reintroduce the genes of long-dead animals. The bantengs growing in the cows all came from the cell line of one banteng, Stud No. 319, that died 20 years ago.

A scant few others are working on similar projects.

The Audubon Center for Research of Endangered Species is working on cloning a number of rare animals, including the banteng, antelopes and exotic cats. China is working with rabbits as surrogates for cloned pandas, which are about the size of a stick of butter when they're born.

There's even talk about bringing extinct animals like the woolly mammoth back to life with the technology, a premise Rider dismisses as unrealistic.

The problem with bringing back extinct animals is the lack of viable DNA. Scientists need relatively large quantities of live tissue to make cloning succeed, and even then they have significant technological and ethical hurdles to overcome.

The inefficiencies of success - six bantengs out of 30 original pregnancies will be considered a grand slam - highlights the technological challenges. Cows are the most cloned animals in the world, and it often takes 10 pregnancies to yield a single cloned bovine.