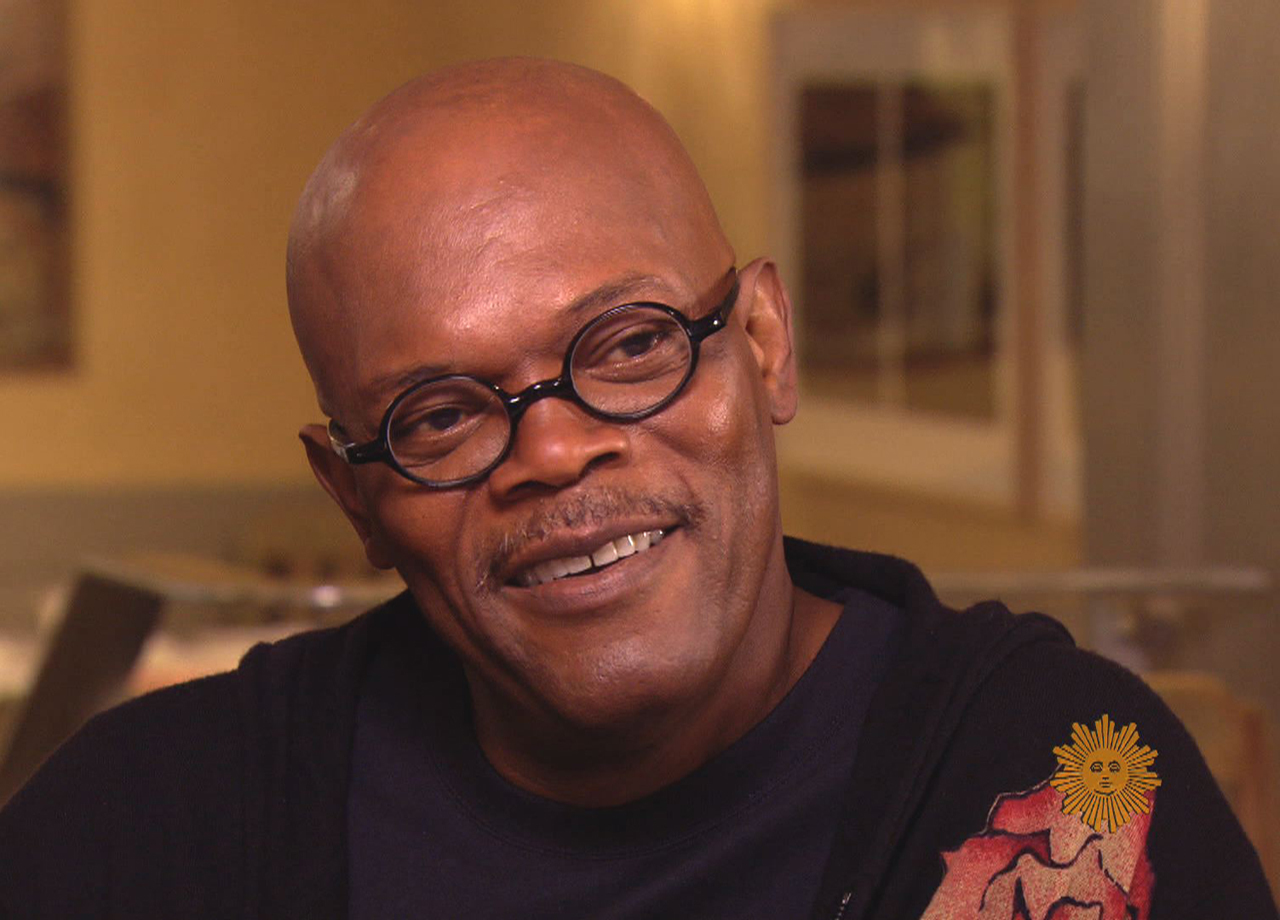 Samuel L. Jackson has made quite a name for himself in movies, But as Russ Mitchell tells us, Jackson is now playing a role very different from his tough guy movie persona ... and he's doing it On Broadway:

Samuel L. Jackson has a way with words - both profound ("The path of the righteous man is beset on all sides by the iniquities by the tyranny of evil men") and the profane ("I have HAD it with these mother------- snakes on this mother------- plane!").

... which has made the 62-year-old actor one of Hollywood's most bankable stars.

With more than 100 movies under his belt, Jackson's movies have earned almost $10 billion at the box office.

"I've been fortunate," he said. "There's a handful of movies that have made enormous amounts of money, and that just means that the other movies that I'd done have made the kind of money that allows me to continue to work, that people see me as viable as a box office draw to people. People come and see my movies."

And Jackson hopes he's a box office draw for his latest venture, on Broadway, where he's starring alongside Angela Bassett as Martin Luther King Jr. in "The Mountaintop."

"Is it intimidating to play Martin Luther King?" asked Mitchell.

"Not in this way," Jackson said. "Nobody knows him this way. We're used to seeing the orator, or the icon. And I'm coming into a motel room, closing the door, letting my shoulders down."

Set in the Lorraine Motel in Memphis on April 3, 1968, Jackson's Dr. King is reflective and vulnerable on the eve of his assassination.

"He's not a perfect man in this play," Mitchell said.

"No, not at all," said Jackson. "This is one of those kind of informative plays that allows [audiences] to see an icon as a human being; that, you know, talks to his wife same way they talk to their wives, and talks to their kids and cares about their kids; that actually, you know, goes to the bathroom. We look at people, you know. 'Wow, I didn't know he peed!' Yeah, of course he does, you know?" Jackson laughed.

And when we sat down with Jackson on a day off from his eight-performances-a-week schedule, he made it clear he's no stranger to hard work.

"I grew up in a working class family," he said. "When I was a kid, all the adults in my house got up and went to work every day. I assumed that's what grown people do. That's what I do. I just happen to have a very interesting job that's kind of cool!"

It's a work ethic he learned as a child growing up in Chattanooga, Tenn. Raised by his grandparents, Jackson's family had high expectations.

"It was never a question in my mind that I was going to college, or theirs," he said.

Jackson said he wanted to be a marine biologist: "I wanted to be the black Jacques Cousteau. I wanted to hang out underwater, look at fish and figure out a way to feed the world from the ocean."

But he changed course after auditioning for a play his junior year.

"The night I showed up, all the girls, they were doing photos," he recalled. "And all the girls were sitting around in corsets and garter belts.

"Okay," he laughed, "this might be all right! And I got in the play and I've kind of been doing it ever since."

Jackson met his wife LaTanya Richardson, a fellow actor and political activist, on campus. They've been together 41 years, and have a 29-year-old daughter.

"By anybody's standards, that's a long time," Mitchell said. "By Hollywood standards, forget about it! What your secret?"

"And I go on location a lot," Samuel added.

"We do believe that the family unit is the strongest unit," LaTanya said. "And that's the most political and revolutionary thing you can do, is keep a strong, black family together. So that's what we did."

What Jackson and Richardson also did together was weather through his alcoholism and crack cocaine habit. He went to rehab in 1990, and just one week after being released, Jackson found himself on the set of Spike Lee's movie "Jungle Fever" ... cast, of all things, in the role of a crack addict named Gator Purify.

"Was it hard for you to do that role, based on what you had just come from?" asked Mitchell.

"Tempting at all?" Mitchell asked.

"No. Listen, I was so happy to be clean and not miserable, 'cause I had been miserable for a long time," he said.

It was a breakout role, and the newly-sober Jackson infused a bit of his former self into the character.

"I was like the life of the party when I was an addict - you know, hung out with people, I made 'em laugh and we got high, we did stuff. So I wanted Gator to be that guy, you know, who could charm his mom, he could charm his brother and get what he needed, and be very manipulative."

For Jackson, his sobriety was the crucial step for success.

"I had to figure it out, that maybe when I showed up at an audition, maybe I DID smell like beer or wine or whatever. It wasn't till I got into rehab that I had an opportunity to stop and say to myself, 'Maybe YOU'RE the person that's in the way. So try that for a minute. You've tried everything else.'"

And then there was Mace Windu, a Jedi master, in the "Star Wars" prequel trilogy.

Jackson, a fan of the three original movies, lobbied director George Lucas for a role ... ANY role.

"I was, like, 'Look. I'll be a storm trooper! I just want to, you know, run across screen. I'll put on that white helmet and everything. Nobody even needs to know I'm in it. Just me,'" Jackson said.

When Lucas summoned Jackson to the set a few months later, he had no idea what role he would play.

"I'm in this dressing room," he recalled. "And there's Jedi robes, I'm, like, 'Whoa! I'm a Jedi?' And I go downstairs and a guy comes over with a big Halliburton and he opens it and, 'Pick your light saber handle.

"I'm REALLY in the movie now!" he laughed.

"When you talk about 'Star Wars,' the smile that you have on your face, it's like you're 17 years old," Mitchell said.

"Yeah, come on, it's awesome," Jackson said. "You're sittin' there going, 'It's 'Star Wars!' This is something that's going to be around forever. 'Star Wars'!"

And Jackson is unabashed about the movie choices he's made, even the more critically panned, like "Snakes on a Plane. "

Jackson also isn't shy about admitting he enjoys watching himself on the big screen.

"I don't understand how actors say, you know, 'I can't watch myself,'" he said. "If you can't, why do you expect somebody to pay their money to watch you? If YOU can't watch it, why should somebody else?"

But for Samuel L. Jackson, an actor who has achieved so much, there remains one thing that is unattainable:

"When I was in the theater, I just always want to see the plays, but I wanted to see 'em with me in them. So, you know, movies are perfect for me. I'd still like to see THIS play with me in it."

"Let me know how that works out for ya!" Mitchell said to laughter.

Studying the creativity and intelligence of the octopus